Foundations will build a better life for singing girl from Mpophomeni 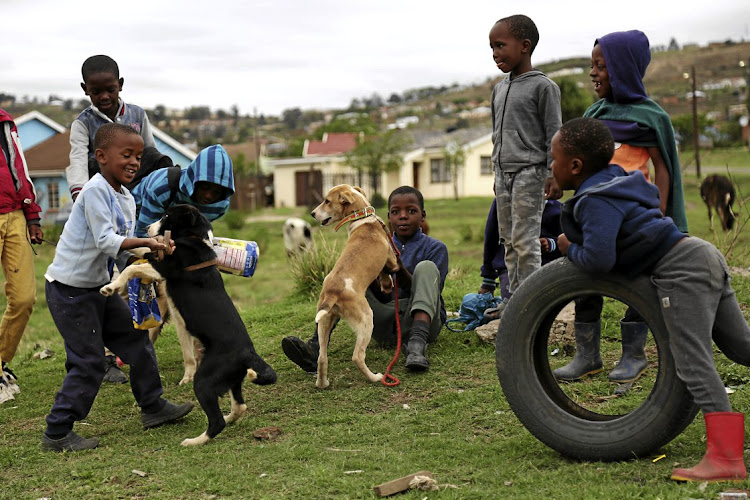 Children arrive with their dogs for dog training in Mpophomeni, near Howick, where a businessman is building a home for a family of seven.
Image: Jackie Clausen

Construction is about to begin on a new home for a family of seven at Mpophomeni in KwaZulu-Natal after their plight went viral on social media.

The family was found after the airing of a video earlier in December 2018 featuring a 13-year-old girl with a powerful voice singing about her hardships.

The child lives with her single mother and five siblings. While her singing was praised, the dire condition of her home prompted businessman Mkululi White and other volunteers to raise funds to build a new home for the Ngubane family.

She was singing a popular gospel song, Mzalwane Qina (Be strong, brethren), which has been performed by a number of recording artists.

Mhlengi ,my brother and I went visit the family of this young talented girl . Please listen@Karabo_Mokgoko@shinga_mhlengi@NgwakoRam@tumisole#FindZuluSingingGirl pic.twitter.com/XVX0PI6EkH

Other children appeared in the footage, which showed a mud-brick house in the background that looked worse for wear.

On December 17, 5,000 bricks and building materials were delivered to the family. White and other volunteers also presented its members with clothes, groceries and blankets.

Speaking to TimesLIVE on Monday, December 24 2018, White said bricklayers were in the process of demolishing the old structure, with new foundations expected to be dug in the next few days.

"Our plan was to have the house built within two weeks. However, we are still raising funds to pay the bricklayers, who have charged R55,000.

"We still need to get some building materials, including roofing materials and windows," White said.

Home takes shape for destitute family of seven in Mpophomeni

A businessman and a group of people descended at Mpophomeni near Howick on Monday morning as their plan to build a house for a family of seven took ...
News
3 years ago

A small businessman has taken it upon himself to build a home for a family of one woman and six children whose cry for help was shared on social ...
News
3 years ago