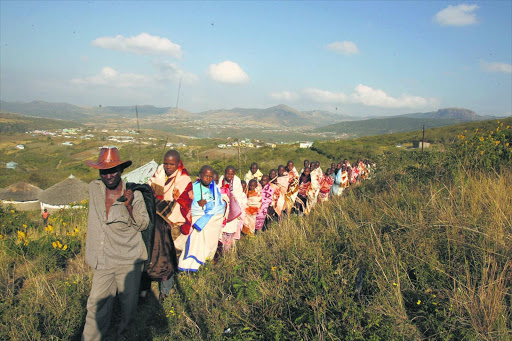 A circumcision traditional nurse leads a group of amakrwala back to their village.
Image: LULAMILE FENI

The country has seen a spike in deaths of initiates, particularly in the Eastern Cape.

This season, 34 deaths have been reported, 20 of them in the Eastern Cape. Eight initiates died in the Free State, three in North West, two in the Western Cape and one in the Northern Cape.

Becoming a woman: The secret right of passage

In a village nestled between Limpopo and Mpumalanga, girls, some as young as seven, embark on a historical six week secret rite of passage to prepare ...
News
4 years ago

Mkhize said in a statement: “I got a distinct feeling that all the leaders and amakhosi we met... are very concerned and care deeply about the lives of the initiates and would want to avoid deaths by all costs.”

“Amakhosi are desperate to work with government and medical doctors to curb the deaths, which number over 400 since 2012.

“There was also general consensus to revive and implement the agreement made between amakhosi and government departments which helped to reduce fatalities in 2015. This is a positive step,” said Mkhize.

The minister will convene another meeting “to focus on ensuring zero deaths and mutilation”, his office said.

This meeting is scheduled for the second week in January 2019.

Reconstruction is an option for botched circumcision victims

It's expensive, but what was botched at initiation can be fixed
News
3 years ago

In a bizarre turn of events, a 19-year-old who illegally circumcised 21 boys was captured and circumcised himself as it turned out he had not ...
News
3 years ago

We love chiefs‚ we don't want to cut them out of initiation: parliament chair

The Customary Initiation Bill is not intended to take away the custodianship of traditional initiation‚ parliament’s portfolio committee on ...
News
3 years ago