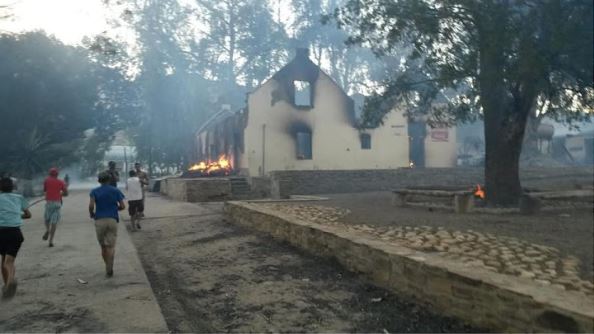 A fire has destroyed the town hall, the school and an estimated 45 homes in Wupperthal, near Clanwilliam.

“An estimated 200 people are left homeless after their homes were destroyed,” said City of Cape Town official Wilfred Solomons on Monday December 31 2018. The fire broke out on Sunday December 30 2018.

The blaze that swept through to Wupperthal Moravian Mission Station also destroyed the clinic and parsonage of the minister.

Emergency personnel from the Western Cape government and Department of Health assisted victims throughout the night and have been placed on standby to assist where required, said Solomons.

An emergency meeting with the West Coast District Municipality, Fire and Disaster Management Services, the Moravian Church and the community has been organised for Monday December 31 2018.

Aerial assessments will determine the extent of the damage.

Relief aid to source clothes, tents, food and other basic supplies for the community is being organised by government entities, charities, such as the Red Cross Society, and individuals.

Fire struck the community of Wupperthal in the Cederberg. Please feel free to contact me for any donations. 30 houses burned down. pic.twitter.com/V89R1BcfGS

Killer fires devastated many communities in the past few months

From natural to man-made, wildfires have killed many people and destroyed thousands of homes.
News
3 years ago

Replanting timber plantations destroyed in the recent Garden Route fires will cost around R80m, according to industry estimates.
News
3 years ago