From Clifton to Jacob Zuma, here are five big stories you may have missed this weekend 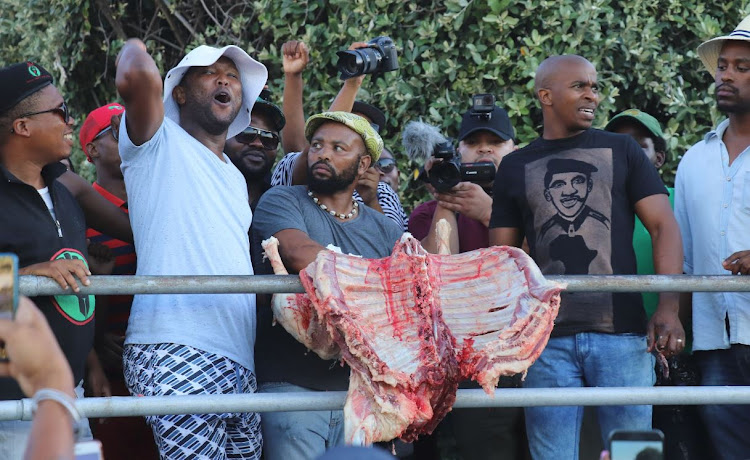 Demonstrators celebrate in Clifton after a sheep was slaughtered in a cleansing ceremony.
Image: Twitter/iGrootman

From slaughtering a sheep on one of Cape Town’s luxurious beaches to a president turned recording artist, here are five news stories that made headlines this weekend.

The City of Cape Town has confirmed it will lay charges against people who slaughtered a sheep on 4th Beach, Clifton, Cape Town, on Friday December 28. The killing of an animal in a public area without consent is prohibited by the city.

Protests and social media outrage broke out after private security reportedly removed people from the upmarket beach on December 23.

On Friday, protesters took to Clifton’s 4th Beach, where they slaughtered a sheep to “cleanse the demon of racism”, causing outrage from people who viewed it as animal cruelty.

The security company, PPA, claimed it was brought in to assist city law enforcement after two teenage girls were allegedly raped. The city has distanced itself from the company and the SAPS said no rape incidents were registered at Camps Bay Police Station on that day.

The actions of the security company sparked mixed responses from Cape Town residents and on social media as tensions escalated between anti-racism activists and anti-animal cruelty protesters.

#ReclaimClifton trended on social media as images and footage of the slaughtered animal spread widely.

Clifton sheep slaughterers will be charged - City of Cape Town

As the row around people being asked to leave Clifton Fourth Beach at sunset continues to snowball, the City of Cape Town is going to lay charges ...
News
2 years ago

DRC takes to the polls

On Sunday December 30 2018, the Democratic Republic of Congo took to the polls for its much-anticipated national elections.

There were challenges on the day, from heavy rains to delays at voting stations, including broken machines and some polling stations opening several hours after the stipulated times.

The election may see President Joseph Kabila having to let go the reins, after being in power since 2001.

Three women were killed and nine other people sustained injuries in a stampede at Prophet Shepherd Bushiri’s church in Pretoria on Friday December 28 2018.

According to the Enlightened Christian Gathering Church, the stampede occurred when church attendees rushed for shelter during a thunderstorm.

Bushiri is expected to host a New Year’s crossover from Monday December 31 2018 to Tuesday January 1 2019.

Three women were killed and nine other people injured during a stampede at Prophet Shepherd Bushiri’s church in Pretoria.
News
2 years ago

Fourteen people lost their lives when violence broke out on the country’s election day on Sunday December 30 2018.

Ten people were killed during clashes between current leader Sheikh Hasina’s Awami League and the opposition, the Bangladesh Nationalist Party.

Three men were shot and killed by police and an auxiliary officer was killed by opposition activists.

From the Union Buildings to the studio

Former president Jacob Zuma surprised many as he sealed a deal with the eThekwini Municipality to record some of his most loved struggle songs.

Head of parks, recreation and culture for the municipality Thembinkosi Ngcobo announced on Twitter that the former president would do a live recording of some of his favourite struggle songs in April 2019.

Jacob Zuma to become recording artist - thanks to Ethekwini municipality

Former president Jacob Zuma will be recording his favourite struggle songs in 2019 in a deal he reached with Ethekwini municipality’s department of ...
News
2 years ago