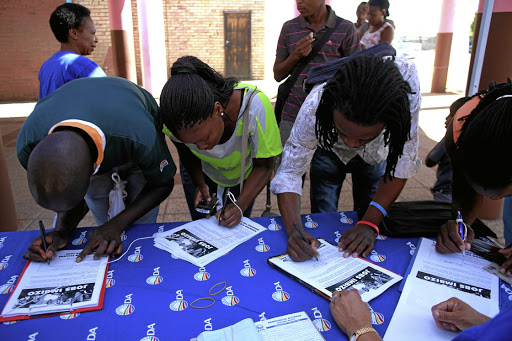 The results of an international reading study say that 78% of grade 4 learners in SA cannot read for meaning, in any language.
Image: THE TIMES

The real pass rate hovers just above 50% for the past couple of years — a far cry from the 70%-plus matric pass rate touted by the basic education ministry every year.

This is according to Equal Education (EE), which on Thursday contrasted the matric pass rate with the consistently high number of pupils who fail to finish school. The results of the class of Matric2018 will be announced this evening.

Over three years, EE said a "look at the throughput rate suggests that the pass rate has actually been declining and ranges between 41% and 37%".

EE said the annual matric pass rate announcement "is a misleading fanfare that, on its own, provides a poor indication of the overall health of the basic education system".

It noted that the provinces that reflected the largest improvements in their 2017 pass rates — Eastern Cape, Limpopo and KwaZulu-Natal — were also the provinces with the biggest decrease in learners who wrote the matric exams.

"This points to a worrying practice that is commonly associated with high-stakes testing: often referred to as ‘culling’ or ‘gate-keeping’. Teachers or principals sometimes hold learners back in grade 11 or encourage them to take different subjects in order to improve pass rates."

EE also contrasted the 2017 announcement of a 75.1% matric pass rate, with the "devastating" results of an international reading study — that 78% of grade 4 learners in SA cannot read for meaning, in any language.

This is the most crucial skill that learners need to acquire and SA's poor performance in this area demands a concerted government plan to tackle it, says EE — which described the foundation phase as a national emergency.

"The years from grade R to grade 3 are life-altering for SA’s learners: it is when the foundation must be laid for learning in all the later grades. The consequence of a weak foundation phase is weak academic outcomes in high school — and the consequence of that is that many learners never reach matric, or attain a tertiary qualification," said EE.

"Keeping learners in school and ensuring that they leave school with a meaningful qualification, remains one of the key challenges in SA’s public education system."

Class of 2018: The best just keep getting better

Private school pupils who wrote the National Senior Certificate (NSC) exams that were administered by the Independent Examinations Board (IEB) ...
News
3 years ago

"Foundation-phase teachers must be capacitated (through pre-service and in-service training); must be supported by government education officials, parents and the broader public; must be well-remunerated; and must teach in environments that are dignified, safe, and well-resourced."

Commenting on the class of #Matric2018 now aiming for tertiary studies, EE said the quality of basic education they received remains an important determinant of learners’ future prospects.

In the past, learners from wealthier quintile four and five schools have obtained the largest proportion of bachelor passes, despite making up a smaller percentage of learners who wrote the matric exams. In both 2016 and 2017, learners from quintile one to three schools obtained just under half of the bachelor passes, despite making up around two thirds of learners who wrote the exams.

"In analysing the 2018 matric results, we should be looking to see greater shifts in the proportion of bachelor passes obtained by learners from the poorest schools, particularly at a time when access to higher education is receiving renewed attention," said EE.

Another concern, the educationists said, was that while the government had attempted to address fees as a barrier to higher education, its ad-hoc announcement of free higher education came at a significant cost: Funding for the Second Chance Programme, aimed at supporting young people who are repeating matric, was almost slashed by approximately R117m over the medium-term.

Unemployment is the fate of those who drop out.

A previous StatsSA report shows that people who never obtained a matric certificate form the largest proportion of SA’s unemployed — 56%. Those with a matric qualification comprise 35%, while less than 2% of those that are unemployed are graduates.

Said EE: "Today’s matric results announcement provides an opportunity to look beyond crude matric pass rates towards a more nuanced picture of the basic education system. Questions around throughput rates and whether class dynamics in results are shifting should be at the forefront of conversations around these results, rather than meaningless comparisons of traditional national and provincial pass rates.

"This is also an opportunity to call on government to address its most urgent priority: SA’s literacy crisis. As long as this is left unaddressed, the basic education system will continue to fail the majority of learners."

The department of basic education, however, hit back.

“The department is extremely disappointed by Equal Education’s attempt to gain media exposure by attempting to discredit the announcement of the 2018 Grade 12 National Senior Certificate results in a statement before they have even been released," the department said in a statement.

"This takes away from the individual accomplishment of each and every learner that has passed through at least 12 years of schooling and worked hard to attain this all important qualification that in many instances is a gateway to a brighter future.

"We view this as nothing more than a grotesque attempt to get media attention, which ultimately speaks to their funding model, on the back of trivialising the National Senior Certificate results.”

Daniel Archer from St John's College in Johannesburg achieved a 87% average in the 2018 matric exams, despite a busy schedule in both rugby and ...
News
3 years ago

6.2-million South Africans between the ages of 15 and 64 are currently unemployed.
News
3 years ago

The emphasis of the Jobs Summit must be on the short to medium term and take notice of a current reality that SA has a very large under-educated and ...
News
3 years ago