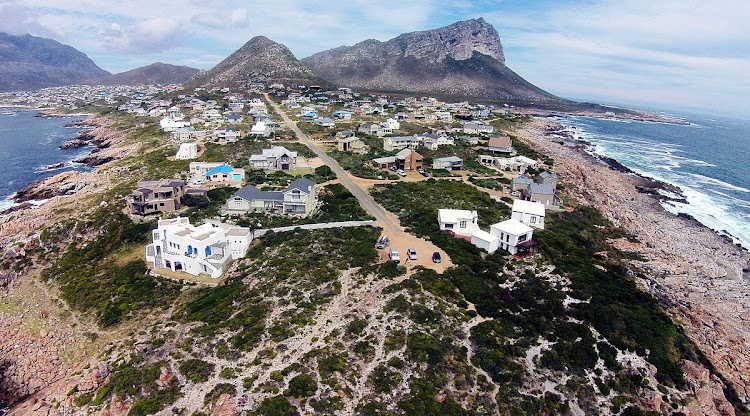 Pringle Bay, where homes were evacuated early as the flames spread from Betty's Bay.
Image: Wikipedia

A 34-year-old man who allegedly started the wildfire near Betty’s Bay in the Western Cape, which continued to rage for a seventh day on Monday January 7 2019, is expected to spend the next week in jail until his bail hearing.

The pink glow of signal flares floating in the night sky are a common substitute for fireworks for South Africans celebrating the start of a new year, but a Betty's Bay resident's New Year’s Eve celebrations may have resulted in tragedy and damage worth millions of rands.

The Caledon Magistrate’s Court postponed the case to Monday next week for the submission of bail information.

The suspect allegedly shot a signal flare into the air which a southerly wind took into the fynbos behind his house on a mountain slope.

Strong winds have pushed the fire north along the scenic R44 which experiences high traffic volumes with tourists exploring the southern coastline over the festive season.

The road was closed on January 7 while firefighters from Working on Fire, City of Cape Town, Table Mountain National Park and the Overberg municipality battled to control the blaze with the help of helicopters as it burned on the upper slopes of the mountain range.

The Kogel Bay resort was closed and property between Rooi Els and Gordon’s Bay was evacuated.

Kleinmond police said they needed to assess the extent of the damage in monetary terms to give the court a total estimate when assessing the bail application.

It is understood that two people were seriously injured in the fire last week while a reported fatality might have resulted from natural causes and not the fire.

The man is facing charges under the National Environmental Management: Protected Areas Act for causing a fire, discarding a burning object in a place where it could start a fire, and acting in a manner likely to cause a fire.

Demolition looms for much of hamlet
News
3 years ago

Fires, drought, invasive plants and, of course, humankind, have taken their troll on SA’s plant and animal resources, but there are some beacons of ...
News
3 years ago

Police are probing the torching of two KwaZulu-Natal schools, one a state-of-the-art facility which has been broken into 16 times in two years.
News
3 years ago

A 34-year-old man was arrested on Thursday on suspicion of causing the fire still burning in the Betty's Bay/Pringle Bay area of the Overberg, in the ...
News
3 years ago