Police seize drugs, illegal cigarettes worth more than R1m in first week of 2019 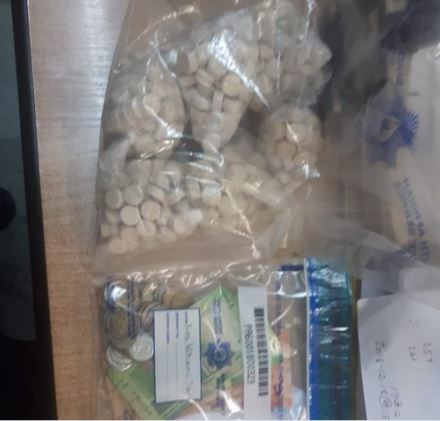 The police's war on drugs netted more than R1m worth of narcotics and illegal cigarettes in the first week of 2019.
Image: via Twitter/@SAPoliceService

The South African Police Service (Saps) hit the ground running in the first week of 2019, confiscating drugs and illegal cigarettes with a street value of more than R1m.

On January 4 the police seized about R700,000 worth of Cat and crystal meth in Willows, Bloemfontein, as part of its war on drugs.

#sapsFS Parkweg #K9 Unit members acted on a crime intelligence driven information about drugs in Willows, Bloemfontein. CAT and Crystal Meth valued at about R700 000 was confiscated. Two suspects were arrested and charged with dealing in drugs. #DrugsOffTheStreets NP pic.twitter.com/4O4uXju2x6

The Upington border police and Keimoes Saps confiscated illegal cigarettes and creams worth R364,520 during a raid on a business premises.

#sapsNC Upington Border police and Keimoes #SAPS raided business premise at Keimoes in the ZF Mcgawu Cluster and illegal cigarettes and creams valued at about R364 520 were confiscated. One suspect was arrested and will be appearing before court soon. NP pic.twitter.com/kMa8LCkPmm

On January 6 the East London Saps seized about R12,060 worth of drugs, including 110 mandrax tablets, dagga and crystal meth, from a man in Orange Grove, Johannesburg. The suspect was arrested for dealing in drugs.

At the weekend of January 5 and 6, 11 people were arrested by the Blue Downs Cluster in possession of drugs, including more than 38 packets of tik and about 58 mandrax tablets.

In Kimberley, on January 6, the police seized Cat and tik worth R45,000. Two suspects were arrested in connection with dealing in the drugs.

#sapsNC Police in Kimberly arrested 2 suspects in connection with dealing in drugs. They were arrested at Southy Str Flats in Kimberly today. Tik and CAT grubs to the value of R45 000 confiscated. Suspects are expected to appear before the Kimberley Magistrates court soon. NP pic.twitter.com/CMoO13qwxh

Police also arrested suspects for being in possession of mandrax in the Eastern Cape’s Tolofiyeni area, East London, and Mitchells Plain and Bishop Lavis in Cape Town.

A routine search at the Westville Medium B prison in Durban on Monday resulted in the confiscation of a number of prohibited items, the department of ...
News
3 years ago

Two people have been arrested after they were found in possession of a date rape drug as well as dagga plants and products, with an estimated value ...
News
3 years ago