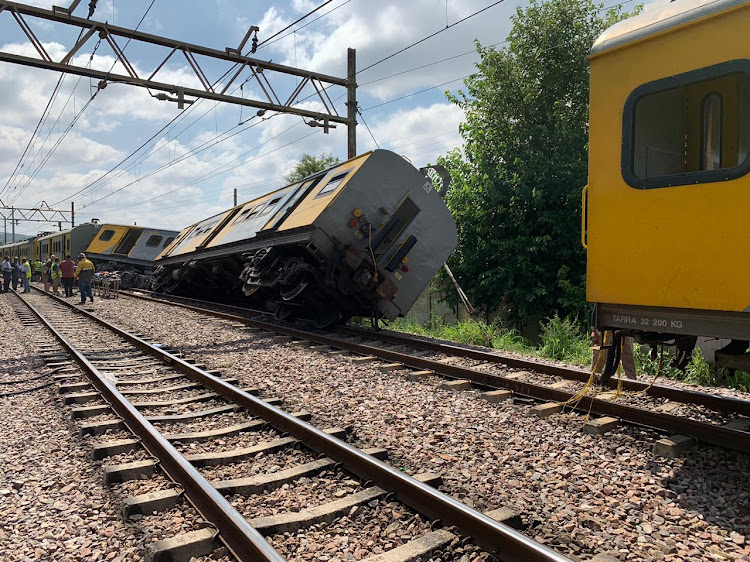 Four people died and 620 others were injured in a train accident in Pretoria on January 8, 2019.
Image: Supplied

"All the people have been removed. One person sustained critical injuries."

Metrorail spokesperson Lillian Mofokeng said the two trains were both travelling on the same line towards Pretoria from Mabopane.

Two trains collided in Pretoria on January 8 2019 during the early-morning rush-hour commute. Four people have been killed and hundreds injured.

Mofokeng said a board of inquiry would be instituted to determine the root cause of the accident.

Trains running between Pretoria, Mabopane and Dewildt are temporarily suspended until further notice.

All commuters in possession of valid weekly and monthly tickets will be transported by bus until the line is reopened.

Metrorail said it would set up a walk-in centre at Pretoria station to assist commuters  involved in the accident.

"We urge commuters to bring the relevant documents with for processing," Mofokeng said.

Two people have been killed and dozens are injured in a train accident near Pretoria's Mountain View train station.
News
3 years ago

Gauteng MEC for roads and transport Ismail Vadi has called on the Passenger Rail Agency of SA and the Railway Safety Regulator to "urgently investigate" the cause of the crash.

“We are deeply shocked by this tragic accident so early in the new year.

"We would like to express our heartfelt condolences to the families of the deceased and wish those injured a speedy recovery," Vadi said.

President Cyril Ramaphosa sent his condolences to the crash victims.

“Our thoughts are with those who lost their lives and their families. To the injured I would like to wish you all a speedy recovery,” Ramaphosa said.

“I would like to also encourage emergency services team on the scene to do all in their powers to help those who are still trapped under the train.”

Transport minister Blade Nzimande, Prasa and the Railway Safety Regulator will host a media briefing on Tuesday at 5pm.