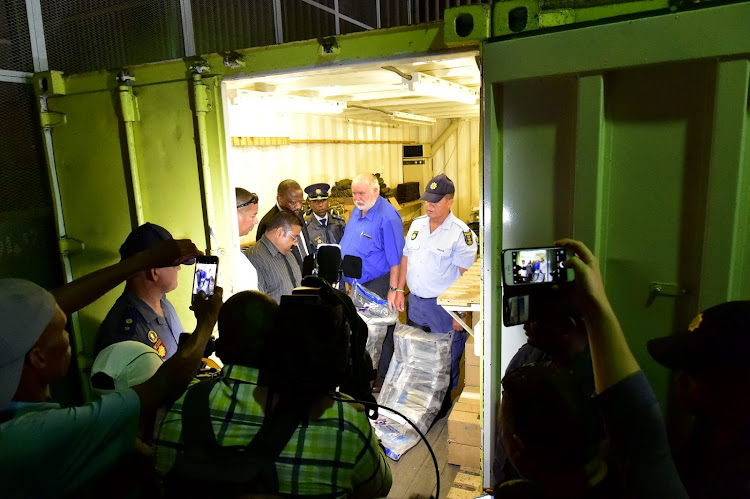 Police remove cocaine worth more than R700m discovered during a bust at the Port of Ngqura on Tuesday.
Image: Eugene Coetzee/The Herald

A drug bust at the Port of Ngqura on the outskirts of Port Elizabeth on Monday afternoon led to cocaine with a street value of over R700m being seized.

The bust was carried out by the Hawks in conjunction with other specialised police units.

Members of both national and provincial Hawks swooped on the deep-water port following a tip-off. Once on board a ship, officers found the cocaine stashed below the deck. In total, the cocaine is worth about R720m on the streets.

In 2010, cocaine worth more than R400m was seized. It had been sealed inside the frame of a shipping container, also at the Port of Ngqura.

Following that bust, former Cuban spy Nelson Yester-Garrido – who is believed to be linked to a drug network involving convicted drug dealer Glenn Agliotti – was arrested at his home in Hyde Park, Johannesburg.

Charges against Yester-Garrido were later withdrawn following numerous delays in the case.

Thousands of litres of booze seized at Port Elizabeth harbour

Authorities have revealed that illegally imported liquor and food worth more than R1-million was confiscated during a joint clampdown at the Port ...
News
4 years ago

Goods worth R890.6m confiscated by customs in past three months

The value of goods confiscated by customs officials in the past three months totalled R890.6m‚ the South African Revenue Service (Sars) revealed on ...
News
2 years ago

Woman bust at Cape Town airport for possession of cocaine

A 38-year-old woman is due to appear in the Bellville Magistrate’s Court on Thursday after being found in possession of cocaine with an estimated ...
News
3 years ago

Drugs valued at over R30m seized at OR Tambo airport

South Africa has become a leading exporter to Asia of the drug tik and amphetamine-type stimulants, such as ecstasy. "Drugs from South Africa are ...
News
7 years ago
Next Article