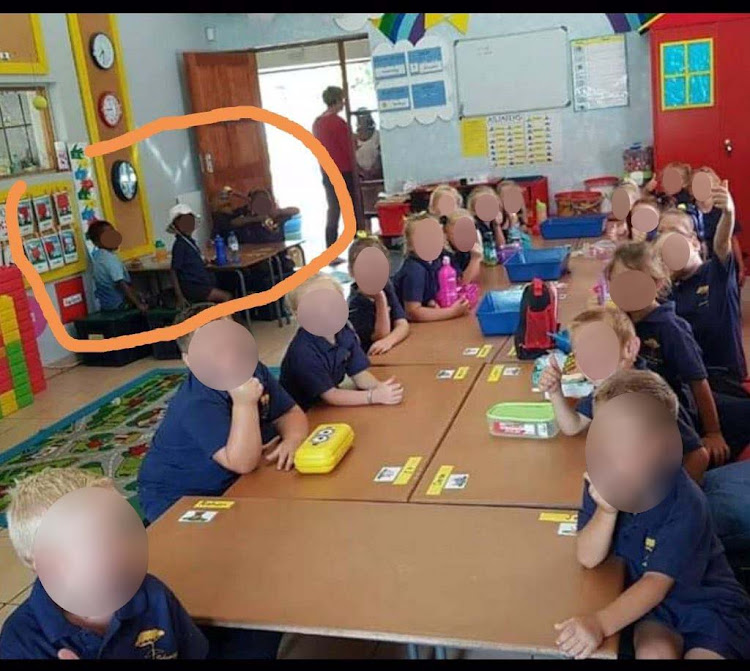 A picture of one of the grade R classes at Laerskool Schweizer-Reneke seemingly depicting white learners seated separately from the black children.
Image: Supplied

The mother of a grade R learner from Laerskool Schweizer-Reneke in the North West is fuming after a picture showed her child and three other black children sitting separately from the white children in their class.

The picture was shared on the school's WhatsApp group by the children's class teacher.

"This was meant to be an exciting day for me but it's not," said the parent.

The mother, who is not being named to protect the identity of her child, told TimesLIVE that her child's first day in grade R had initially started off smoothly.

She and other parents dropped their children off and were asked to leave the school premises.

At 9am, they received an update from the children's teacher on how their day was going via the WhatsApp group.

"All I saw was messages from the white parents saying 'dankie, dankie' ['thank you, thank you' on the WhatsApp group] but no one was saying anything about the separation of the learners," said the fuming mother.

She said after discussing this with another parent outside of the WhatsApp group, that parent contacted the school principal to ask about the seating arrangements

TimesLIVE was told that the principal said she was not aware of the situation. The school is being contacted and this article will be updated once its response is obtained.

Grade ones across the country are taking their fist step in the formal academic system. Some pupils are more excited to venture into their new ...
News
3 years ago

Asked how the situation made her feel, the frustrated mother said she hoped her five-year-old child was still too young to have noticed what was happening.

"But I am pissed off," said the mother, who said she was not sure what further steps to take.

Meanwhile, the picture has since gone viral on social media.

Among those who voiced their concerns was student activist Mcebo Dlamini.

"What is most provoking about this image is not that black kids are ostracized from white kids, that is common in our supposedly post-apartheid Africa. Rather what becomes painful is that there are black people who still insist that racism has ended and who think that blacks and whites can have peaceful relations that do not have undertones of racism," he wrote on his Facebook page.

"This is impossible so long as white people have power, what therefore is needed is to change the existing power dynamics such that black people can have dignity. You can take your kids to the whitest schools in the country but so long as the black majority is poor, your kids will always be reminded that they are black and therefore inferior. Your money can't buy you out of this anti-black world. It is only when the black collective is free that we can begin reclaiming our rightful place in our land of birth."

The school and North West education department have been approached for comment.

The DA leader Mmusi Maimane has become a victim of bullying after posting a heartfelt message to his son, who started grade 1 on Wednesday.
News
3 years ago

'I want my daughters to grow up in an inclusive environment': parents speak out on 'racism' at Cape school

Growing up in the farming town of Wellington during apartheid‚ Sarah Grant-Smith – a parent at Rustenburg Girls’ Junior School‚ which is currently ...
News
3 years ago