Tragic first day back for Nkandla school staff and pupils 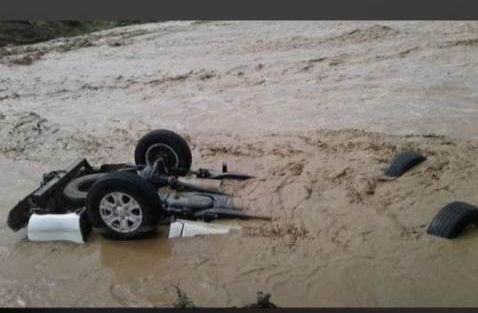 Four people drowned on Tuesday January 8 2019 when the Ford Ranger they were travelling in was swept away and overturned in raging waters near Nkandla in northern KwaZulu-Natal.
Image: Supplied

It was a tragic first day back at school on Wednesday when staff and pupils of Bizimali High School in Nkandla, northern KwaZulu-Natal, learnt that an accident had claimed the life of a teacher.

Disaster management teams including firefighters were dispatched to the scene of the accident at Umvoti where a bakkie, carrying four people, washed away into the local Nadi River. They recovered four bodies, including that of the school's accounting teacher, Sisanda Dhlomo.

Principal Ntando Ntuli told TimesLIVE on Wednesday that three people from a private boarding establishment and Dhlomo were en route from Greytown when the driver of the bakkie had attempted to cross the river.

"The river is usually dry, but yesterday there was a downpour and a flash flood. The driver thought he would be able to cross the river in his 4x4 but he underestimated the power of the water and the bakkie was swept away, landing upside down. Unfortunately all four people died instantly.

"Today was a very sad day at school. Miss Dhlomo was a much loved accounting teacher who joined us in February 2018. She was the sole breadwinner in a poverty stricken family," he aded.

KZN Cogta's disaster management team is on the scene working with local authorities to help and provide support to affected families.

In Hlobane under abaQulusi Municipality in Vryheid, gales and storms damaged  houses and other infrastructure. Other incidents have been reported in Nottingham Road and Mooi River where hail damaged several houses.

Disaster teams have also commenced with assessment of the damage.

"Our condolences go to the families of the victims. It is devastating to witness such carnage at the beginning of a new year,” said Cogta MEC Nomusa Dube-Ncube.

EFF branches to be deployed to primary schools to assess admissions

Branches of the EFF will be deployed to schools on Wednesday to ensure that the admission of grade one learners commences without any glitches, the ...
Politics
3 years ago

Grade ones across the country are taking their fist step in the formal academic system. Some pupils are more excited to venture into their new ...
News
3 years ago