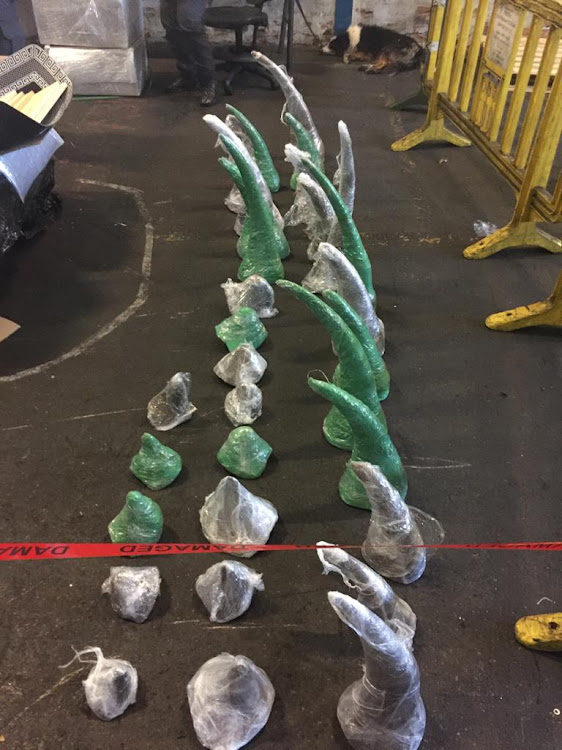 The more than 30 pieces of rhino horn the police seized at OR Tambo International Airport in Johannesburg on Thursday January 10 2019. No arrests have been made.
Image: Supplied/Saps

Police seized more than 30 pieces of rhino horn worth R23m at OR Tambo International Airport in Johannesburg on Thursday.

"Recent reports of the detection of rhino horns in the East that originated from southern Africa led to increased enforcement interventions on outbound flights at the cargo area of the airport," Lt-Col Katlego Mogale said.

"The K9 members (the police dog unit) arrived at a certain warehouse where export consignments were packed to be shipped out."

Mogale said a detector dog identified a shipment destined for the Middle East.

"Upon examination the consignment was found to be containing door mats as well as cut and laminated plywood. Further examination revealed more than 30 pieces of rhino horn wrapped in plastic concealed under the laminated wood pieces."

No arrests have been made. The police investigation is continuing.

BidAir Services at OR Tambo International Airport on Thursday suspended one of its employee's for "mishandling luggage".
News
3 years ago

Two attacked at gunpoint after being followed from OR Tambo airport

Two people were attacked at gunpoint in Mayfair, Johannesburg, after being followed from OR Tambo airport, police said on Tuesday.
News
3 years ago