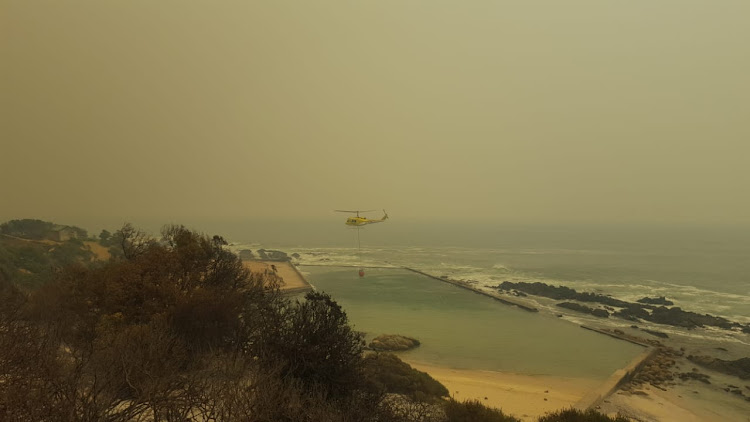 Earlier this week, helicopters water-bombed areas that were inaccessible to firefighting crews on the ground.
Image: Supplied

Firefighters are still fighting a blaze in the mountain area of Kogel Bay in the Western Cape.

He said there were about eight fire fighters on the ground.

The R44 remained closed to traffic.

“It will be evaluated later today to determine whether it would be re-opened.”

Earlier this week, helicopters water-bombed areas that were inaccessible to crews on the ground.

Layne said at the time that strong winds were hampering their efforts.

Meanwhile, the 34-year-old man who allegedly started the wildfire near Betty’s Bay in the Western Cape is expected to apply for bail next week.

The man allegedly shot a signal flare into the air. It was carried by a southerly wind into fynbos on a mountain slope behind his house.

The man is facing charges under the National Environmental Management: Protected Areas Act for causing a fire, discarding a burning object in a place where it could start a fire and acting in a manner likely to cause a fire.

A 34-year-old man who allegedly started the wildfire near Betty’s Bay in the Western Cape, which continued to rage for a seventh day on Monday ...
News
3 years ago