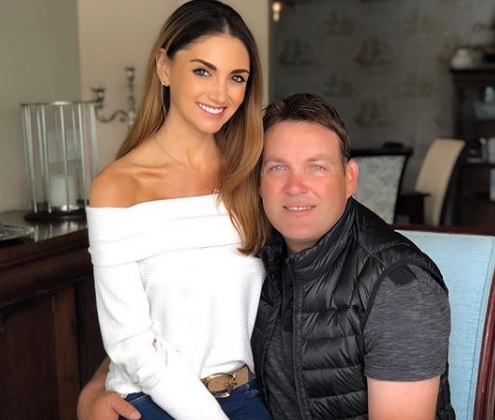 "I look forward to doing this thing called life with you," Charlene Engels shared with Jacques Kallis when on their fourth dating anniversary in October 2018, as they looked forward to their January 2019 wedding.
Image: Charlene Engels on Instagram

"Baby you light my fire" could become shorthand for cricketer Jacques Kallis and bride Charlene Engels, after their weekend wedding was able to go ahead, despite a wildfire cutting a swathe through the Overberg in the Western Cape.

The pair wed at an estate in the Hemel-en-Aarde valley near Hermanus, in an area where fortunately the fire had been contained on Friday. On Saturday, the then bride-to-be shared that their wedding could go ahead.

After the devastation of yesterday’s fire...we are blessed with this view today with a fresh sea-breeze in the air! It’s going to be an amazing day! 🥰💍🥰@jacqueskallis . . . #Hermanus #Hemel&AardeValley

"My wish for you is that you always keep the 'fires burning'," their wedding planner Nick Nicolaou shared on Instagram, seemingly trying to find the positive in what must have been a worrying period for the wedding party.

While the bridal party have kept the details private so far, Nicolaou revealed this snippet: Over 300 stems of "ice white" hydrangeas from Spain and 200 phalaenopsis orchid plants from Singapore had been flown in for the wedding.

On Sunday afternoon, the Greater Overberg Fire Protection Association said the wildfire was still being actively fought in the Hermanus area.

The FPA said in its 2pm update that they expected the smoke from the Hemel-en-Aarde valley and Franskraal to increase.

"Currently the fire is spreading between the farms and are threatening homes and infrastructure. All residents are informed and their safety is the main concern."

Resources to combat the fires were being re-diverted and increased as required, the group said.

"We are very grateful and appreciative that committed support is still coming in from municipalities from all over the Western Cape to relieve the local teams," the association said in an earlier update, which described the Franskraal fire as "very challenging with rapidly spreading lines".

Thirty-one homes were destroyed and 28 damaged by three wildfires that raged across the Overberg in the Western Cape on Friday.
News
3 years ago

A 71-year-old man was seriously injured will evacuating his Betty’s Bay home during a series of wildfires that ravaged the Overberg coast in the ...
News
3 years ago

Suburbs were evacuated in the Overberg region of the Western Cape on Friday as three large fires threatened houses.
News
3 years ago