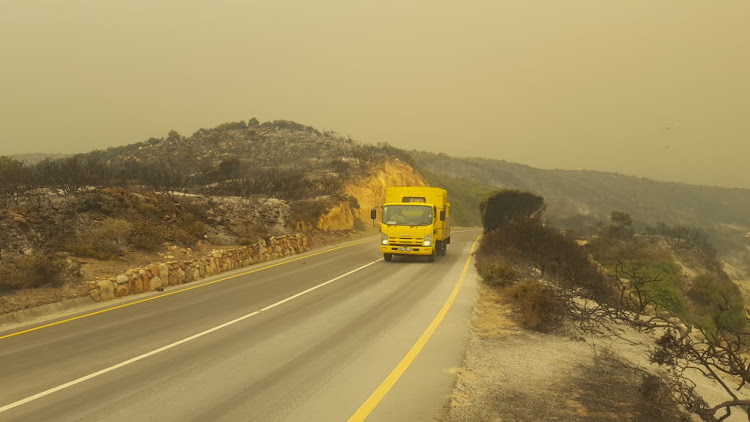 Fire crews are mopping up after two weeks of fighting a fire that broke out in Betty's Bay on New Year's Eve.
Image: City of Cape Town Fire Services

The man suspected of starting a massive wildfire with a signal flare in Betty’s Bay two weeks ago is well known by the police for his previous convictions, which include housebreaking.

Shelton April, 34, appeared in the Caledon Magistrate's Court on Monday when the court was presented with information for a bail hearing next week.

April, who told the court that he is a crayfisherman, had three additional bylaw infringements added to a charge of "causing fire/discard burning object in place where may set fire/act in manner likely to cause fire under the National Environmental Management: Protected Areas Act".

A 71-year-old man was seriously injured will evacuating his Betty’s Bay home during a series of wildfires that ravaged the Overberg coast in the ...
News
2 years ago

This is after he allegedly shot off a signal flare which landed in the fynbos on the slopes of the Hottentots Holland mountains above Betty’s Bay during New Year’s celebrations.

His previous convictions and pending cases were handed to the court on Monday.

An estimate of the cost of the damage is being calculated by the state but will be fully known only once the fires have been completely mopped up. It is thought to run into the millions of rand.

The fire, which was contained by Monday and in the process of being mopped up by fire crews, gutted 12,800 hectares mostly consisting of mountain fynbos.

Media reports have suggested a woman died from smoke inhalation but police sources  said she died of natural causes.

April is expected to appear again on January 23 for a formal bail application.

Meanwhile two other fires in the Overberg region were brought under control on Monday after more than 30 structures were destroyed in Franskraal and Hermanus.

Thirty-one homes were destroyed and 28 damaged by three wildfires that raged across the Overberg in the Western Cape on Friday.
News
2 years ago

Suburbs were evacuated in the Overberg region of the Western Cape on Friday as three large fires threatened houses.
News
2 years ago

"Baby you light my fire" could become shorthand for cricketer Jacques Kallis and bride Charlene Engels, after their weekend wedding was able to go ...
News
2 years ago
Next Article