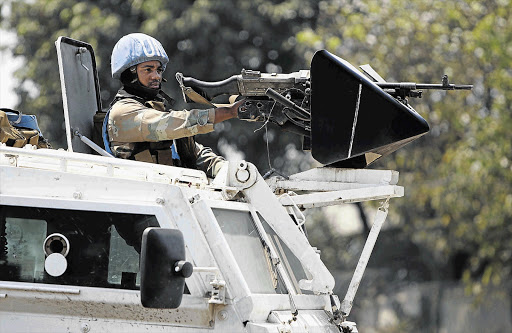 The South African National Defence Force has closed ranks around troops involved in a gun battle at a Durban beach at the weekend.
Image: James Oatway

The defence force has closed ranks around troops involved in a gun battle at a Durban beach at the weekend.

Three people were wounded – two women critically – when an off-duty policeman and several SANDF troops traded fire on Foreshore Drive on Durban’s Bluff in the early hours of Sunday.

SANDF spokesperson Mafi Mgobozi said they were aware of the incident - one which they considered "private".

He could not be drawn to comment on whether it was common practice for soldiers to be armed while away from their base, and what had necessitated their deployment.

TimesLIVE earlier reported that two women caught in the volley of rifle fire were shot in the face and critically wounded, while another man was shot in the calf and was in a serious condition.

A family gathering on Durban's Bluff ended in a hail of gunfire at the weekend.
News
3 years ago

Melani Simon said her family had gathered to celebrate a 50th birthday.

"When it was time for us to leave, one of our friend's car key broke in the ignition, so we were asking anyone for help. These guys stopped and when we asked them if they had pliers, they started swearing at us," she said.

"A big misunderstanding followed. Then they went into their guesthouse and, minutes later, I just heard gunshots," Simon added.

RescueCare spokesperson Garrith Jamieson said the wounded were taken to hospital by ambulance.

Police are investigating a case of attempted murder. No arrests have been made.

Residents of an informal settlement in Marievale, Gauteng, took the South African National Defence Force (SANDF) to the Pretoria High Court on ...
News
3 years ago

The South African National Defence (SANDF) is preparing to deploy technical teams to restore infrastructure at the polluted Vaal River system - and ...
News
3 years ago