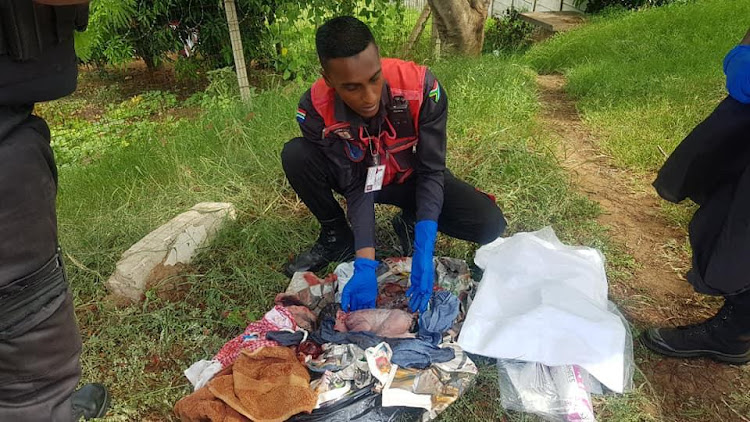 A paramedic reaches into a pile of refuse to take hold of a newborn baby boy who was dumped at the roadside in Verulam on Monday, January 14.
Image: Reaction Unit South Africa

A Verulam woman accused of dumping her newborn son in a plastic bin bag at the roadside on Monday has been granted R1,000 bail.

The 31-year-old mother, who faces charges of child abandonment, made a brief appearance in the Verulam Magistrate’s Court on Wednesday.

She cannot be named in order to protect the identity of the baby and her two other minor children.

She stood quietly in court, with her hands in front of her, furtively glancing around the courtroom.

Her attorney Ricky Ramouthar said that she had been undergoing treatment for depression.

He told magistrate Rajesh Parshotam that his client was unemployed and had been dependent on her parents, who were present in court.

The state did not oppose her release while awaiting trial.

Police spokeswoman Colonel Thembeka Mbele said that the newborn was found dumped near a dustbin in the suburb of Everest Heights.

“A case of child abandonment was opened for investigation and a 31-year-old woman was later arrested,” she said.

Security personnel from Reaction Unit South Africa found the newborn after a passerby reported the cries of a baby coming from piles of refuse.

“We received a call from a member of public requesting assistance after a local scrap collector heard a baby crying in a bin packet that was tied and dumped on the side of the road,” the firm said in a statement.

“Upon arrival medics found the baby in the bin packet wrapped in a denim garment. They cut the umbilical cord which was still attached to the placenta. The child was examined and found to be free of injury.”

The company said the discovery narrowly preceded the arrival of a waste truck.

“The occupants of the truck were in the process of uplifting bin bags which were left for collection on the road side. Had the child not been found in time he would have been thrown into the back of the truck.”

She will appear in court again on January 30.

A 31-year-old mother has been arrested for allegedly dumping her newborn baby "like trash" on the side of the road - shortly before a rubbish truck ...
News
3 years ago

A baby boy, believed to be two months old, was found on New Year's Day at a bus stop in The Hill, Johannesburg.
News
3 years ago

Police have launched a search for the family of a one-week-old baby who was abandoned near a highway in northern KwaZulu-Natal.
News
3 years ago