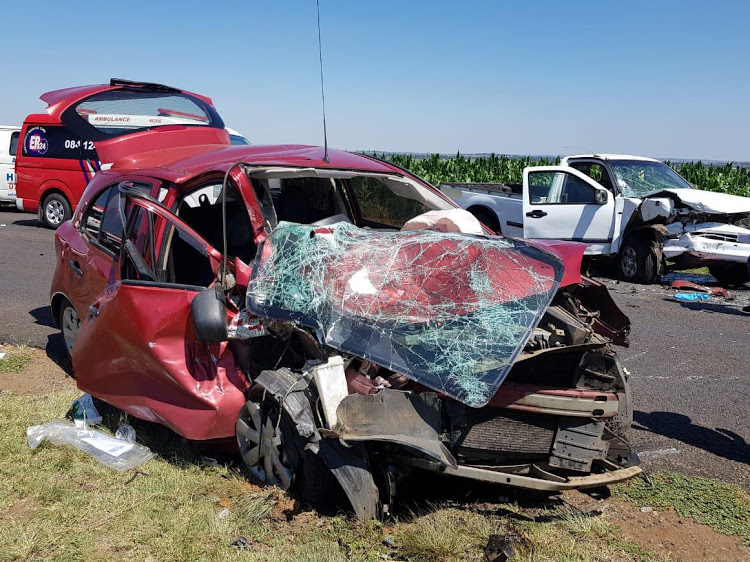 Two people, including a child, were killed and five others injured in a head-on crash between a car and a bakkie in Eloff, Mpumalanga, on December 23 adding to the festive season death toll.
Image: ER24

There were 1,612 deaths on South African roads during the festive season.

This is according to the preliminary Festive Season Road Safety Report, that transport minister Blade Nzimade released on Wednesday in Pretoria.

"Although we have not succeeded in achieving the goal of a 10% reduction in fatalities over this period, we shall not despair. We will continue to take incremental steps until we reach our goal," Nzimande said.

The festive season road accident death toll is mounting across the country after a series of deadly crashes.
News
2 years ago

The minister called the six-week period "very challenging and difficult", saying resources "were stretched to the limit" and the country's roads continued to be "slaughter houses".

Despite the road safety programmes by the department, the death toll rose to 1,612 from last year's 1,527.

Nzimande quoted The World Health Organisation's Global Status Report on Road Safety, released in December, which stated that 58% of road traffic deaths in SA involved alcohol and that the seat-belt wearing rate was as low as 38% for drivers and 31% for front-seated passengers.

According to Wednesday's report, "At least 36% of people dying from road-related incidents this year were passengers." This is an increase from 34% recorded last year.

Nzimande said this was testament to the number of high-occupancy vehicles, particularly minibus vehicles, that were involved in fatal crashes.

According to preliminary figures, 1,286 crashes were recorded nationwide.

The provincial breakdown of accidents and deaths is:

"We remain concerned about the incalcitrant attitude of our road users as the statistics show that human factors account for 90% of contributory factors to fatal crashes compared to vehicle factors that contributed four percent while road and environmental factors contributed 6%," Nzimande said.

According to the report:

Additionally, 17 officials were implicated in the fraudulent issuing of learner licences and roadworthy certificates and four motorists were arrested in separate incidents for trying to bribe traffic officials.

A 48-year-old man in a Golf 7 TSI was arrested by Gauteng traffic police on Saturday after being clocked travelling at 203km/h in a 120km/h zone on ...
News
2 years ago

MMC for safety in Johannesburg Michael Sun has urged parents to choose scholar transport wisely and not compromise the safety of pupils.
News
2 years ago