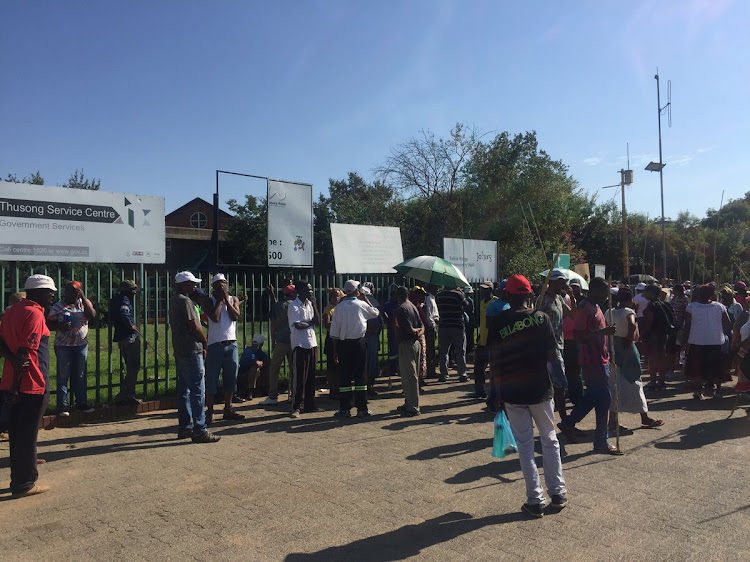 Residents outside the department of housing's offices in Rabie Ridge.
Image: Twitter/Nomonde Buthelezi

Johannesburg council officials in Rabie Ridge, Ivory Park, Ebony Park and Mayibuye in the north of the city were threatened on Thursday morning following violent protests in the area.

Johannesburg MMC for finance Funzela Ngobeni said the municipality's officials in the city's region A were forcefully removed from their offices by protesters who entered the buildings and demanded that services be discontinued for the day amid the protests.

Ngobeni said that the main reason behind  the protests was the demand for houses.

He said that if the protests continued on Friday, revenues services would be suspended in the four paypoints and officials would be dispatched to other offices within the region.

He said that after the protests officials were released for their own safety.

"We cannot put the lives of our staff at stake. We understand the frustration behind the demands but violent behaviour is never a solution," Ngobeni said.

Food Lover's Market, which recently made headlines after a rat was filmed tearing into a salad at its Diepkloof store, has suggested that the City of ...
News
3 years ago

A service delivery protest broke out early on Monday in the North West as over a thousand community members demanded roads and RDP houses.
News
3 years ago

Busy night for emergency services as Joburg ushers in 2019

Johannesburg emergency services officials had their hands full as they attended to a number of incidents, mostly assaults and car crashes, which ...
News
3 years ago