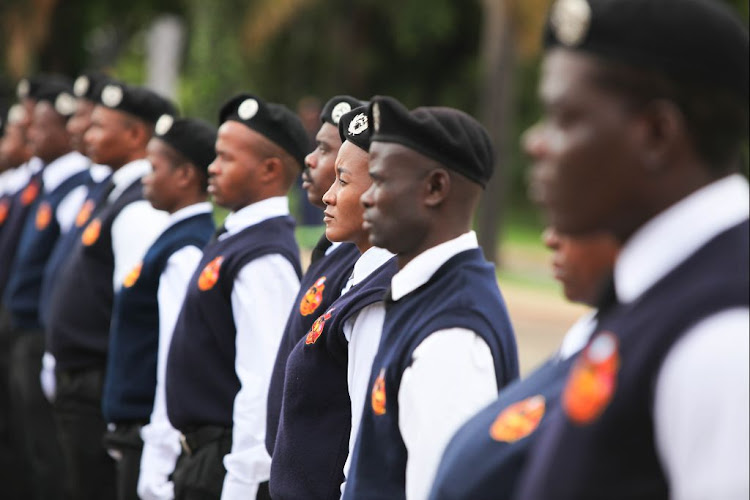 Firefighters line up during a marching ceremony on January 28 2019 at the Florida Fire Station, west of Johannesburg, where mayor Herman Mashaba honoured the firefighters who fought the blaze at the Bank of Lisbon building in 2018. The incident claimed the lives of three firefighters.
Image: Alaister Russell/The Sunday Times

The father of Siphiwe Maropane, a firefighter who died during the Bank of Lisbon inferno in the centre of Johannesburg in September 2018, bears the burden of seeing the location where his son died a tragic death almost every day.

Maropane was the first of three firefighters who died that day, after falling from the 23rd floor.

"My taxi to work passes the place where he died. I don’t choose to think about him but the scene reminds me of him automatically. I lost a hero, a peacemaker who loved his family so much," said Robert Maropane.

Maropane spoke to TimesLIVE at the Johannesburg Emergency Services (EMS) bravery awards ceremony, where his son - along with Khathutshelo Muedi and Mduduzi Ndlovu, two other firefighters who died in the blaze - were honoured for their bravery and commitment to saving lives.

"The event for me was long overdue, it’s been four months," he said.

At last out of hospital, the two tell us what it was like inside the burning building on that dreadful day
News
3 years ago

The mood was sombre during the ceremony. Firefighters who battled the blaze were decorated with Medals of Last Bell and Medals of Valour by acting fire chief Arthur Mqwa, MMC for public safety Michael Sun, and executive mayor Herman Mashaba.

"We are here not only to remember the three lives that were lost but also to honour those who risked their lives to try to save those of their friends, families, peers and members of the public," said Mashaba.

Muedi's wife expressed similar sentiments as Maropane. "He deserves the honour; he had dedicated his life to helping others. He did it without complaining, every day for 12 years," said Fhumulani Muedi.

Muedi recalled how she sometimes forgot that her partner was no more. "He was my best friend, my everything actually, so yes I think about him every day," she said. The couple's two daughters, aged two and five, were left as the memory of her soulmate.

Gauteng premier David Makhura said at the time that officials knew the building did not meet safety standards.

It was reported that the building was only 20% compliant instead of the minimum of more than 80%.

Johannesburg mayor Herman Mashaba was on Monday expected to honour three firefighters who died in the Bank of Lisbon inferno in September 2018 and ...
News
3 years ago

Firefighters have threatened to stop responding to fires in buildings which do not meet compliance standards, saying their concerns about working in dangerous conditions had fallen on deaf ears.

Mashaba confirmed that the investigation into the allegations was under way and a report with recommendations would be released by the city.

"We need to appreciate that among us are people who are willing to sacrifice much of themselves to defend and protect their fellow human beings – even though it takes them away from their wives, husbands, children and parents for many hours at a time," Mashaba said.

The family of Mduduzi Ndlovu could not attend the ceremony due to unforeseen circumstances.

Inside the Joburg hellfire: If you didn't have a cellphone, you died

In his ears forever will ring the voice of his colleague, pleading from within the burning building: “Tebogo, please hurry. The fire is coming ...
News
3 years ago

Timeline to disaster: What happened on the day 3 Joburg firefighters died

Firefighter Muzikayise Zwane‚ who witnessed one of his crew members plummet to his death  in the Johannesburg CBD three weeks ago‚ said his wife gave ...
News
3 years ago

The Johannesburg fireman who found the lifeless bodies of two of his colleagues inside the Bank of Lisbon building was not debriefed on what happened ...
News
3 years ago