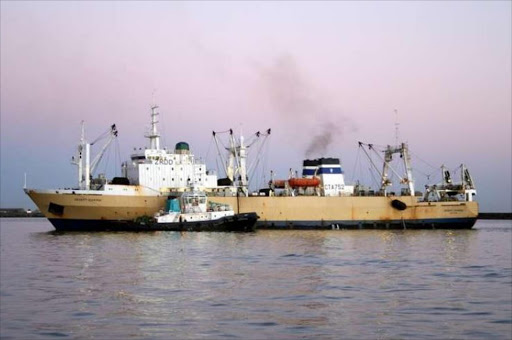 A vessel carrying fish cargo from the occupied Western Sahara, which was due to dock in Cape Town on Saturday morning, made a U-turn and returned to West Africa.
Image: shipspotting.com

A vessel containing fish cargo from the occupied Western Sahara, which was due to  dock in Cape Town on Saturday morning, made a U-turn and headed back to Abidjan in Côte d'Ivoire.

An organisation working to preserve the resources of the occupied Western Sahara, the Western Sahara Resource Watch (WSRW), last week asked the Port of Cape Town to detain the Green Glacier.

The ship was alleged to contain about 5,500 tonnes of fish, caught in the exclusive economic zone waters of the occupied Western Sahara between December last year and early this year.

What are we bid for this shining set of principles, barely used?

South Africa seems, in a little less than 20 years, to have degenerated from something close to a beacon on the international stage to a corrupt ...
Lifestyle
7 years ago

The Sahrawi Arab Democratic Republic (SADR) is a partially recognised state which claims sovereignty over the Western Sahara, which Morocco also maintains it controls.

The WSRW had called for the detention of the ship last week when it was to dock in Cape Town on Saturday January 26 at 1am.

The organisation relied on a precedent set by the high court in Port Elizabeth in June 2017 and February 2018, following the detention of the NM Cherry Blossom, which carried phosphate rock illegally exported from the Western Sahara when it entered the Port Elizabeth harbour in May 2017.

The phosphate was designated for a company in New Zealand.

The expected arrival of the Green Glacier was the first time since cargo from Western Sahara could have entered into South African waters since the detention of the NM Cherry Blossom in 2017.

The organisation said on Friday afternoon that the Green Glacier - owned by Norwegian company Green Reefers - arrived at the outskirts of Cape Town harbour after a week-long transport from West Africa.

It said that for some hours the vessel circulated at the same spot, waiting to enter the harbour.

“Then, at 18h00 local time, without even having moored at the port, the vessel suddenly changed course, took north, picked up speed, and adjusted its destination to Abidjan - the very same neighbourhood it had departed from a week ago.

“The return back to West Africa will take one week, and the vessel has reported an estimated arrival time in Abidjan on February 2,” the organisation said.

South Africa and Morocco will resume diplomatic ties more than a decade after Morocco withdrew its ambassador from Pretoria, South African President ...
Politics
4 years ago

The organisation said it did not know what triggered the  ship's sudden departure from South African waters, nor the form or content of any possible communication between  it and the local harbour authorities.

The organisation had on January 23 requested the harbour to detain the vessel upon arrival and examine the cargo.

WSRW said that Morocco has no rights to issue fishing licenses to foreign vessels and governments in occupied Western Sahara, and that Green Reefers should "immediately halt its disgraceful transport practices that support the Moroccan fishing operations".

The organisation said the occupying power Morocco continued to export fish from the territory. It said the exports took place in four different ways: as fish meal, canned, as fish oil  and as frozen fish.

The organisation said one of the larger players in the shipping of frozen fish from Western Sahara was Green Reefers.

“WSRW contacted the shipping company's CEO Eivind Eidesvik several times on email and  cellphone over the last days, without receiving clarifications or comments on why they had picked up goods in the occupied territory,” the organisation said.

WSRW said it understood that the Polisario Front, the liberation movement of Western Sahara, contacted the Norwegian company a few days ago, protesting the transport.

An organisation working to preserve the resources of the occupied Western Sahara has asked the Port of Cape Town to detain a vessel due to land in ...
News
3 years ago

From seabed to deathbed: Companies get rights to search for phosphate

Prospecting rights over huge areas of South Africa's continental ocean shelf have been granted to three companies searching for phosphate.
Ideas
4 years ago

A South African court has found itself having to adjudicate on a dispute between Moroccan companies and the Saharawi Arab Democratic Republic ...
News
4 years ago