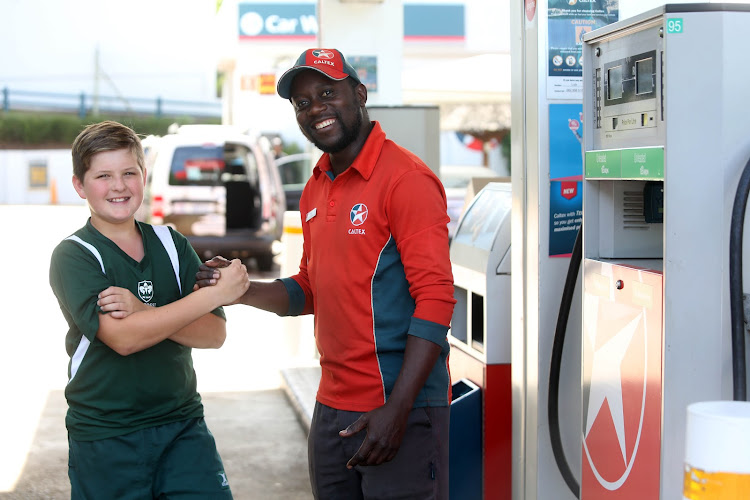 Every time petrol attendant Tony Antonio hops on to his bicycle, he remembers a 10-year-old boy who broke his piggy bank to buy him his brand new wheels.

Antonio, who works at a petrol station in Gillitts, west of Durban, was at a loss for words when he was recently presented with his bicycle by grade 5 pupil Vaughn Preston and his mom Mandy.

Vaughn, who visits the petrol station almost daily with his mum on their way from school to nearby Hillcrest, struck up a friendship with Antonio after Antonio comforted him when he was ill.

"We can all be wonderful." Jeremy Olivier hopes to inspire more South Africans to overlook the negative and love eachother.
Lifestyle
3 years ago

"We met Tony about two months ago. Vaughn was feeling ill and within minutes Tony had him laughing and smiling," Mandy Preston told TimesLIVE on Tuesday.

Since then the two have become firm friends. "We regularly visit the station and Vaughn eagerly looks out for his new friend. Tony always takes the time to talk to Vaughn about the various bikes we haul to Giba Gorge and back, and listens so obligingly to him as he chatters away.

"So when Tony asked us to look out for a reasonably priced bike for him, Vaughn promised to find him one," said Preston.

She said Vaughn asked whether he could use his savings to buy the bicycle.

We met Tony about two months ago. Vaughn was feeling ill and within minutes Tony had him laughing and smiling.

"Vaughn has been collecting all the silver money around the house for months, saving for a 'holiday' for us. He saved about R600, which he wanted to use for a night away. One night he came to me and asked if I really wanted a holiday. When I asked him why, he said he would rather put his savings towards helping Tony get his bike," said the mom.

So they cracked open the piggy bank and took all the silver coins to Game, where he bought Antonio the bicycle.

"Our children make us proud on so many occasions but today my heart and his is so full of the joy at the kind man's face as he - rather stunned - accepted his gift from this 10-year-old boy," said Preston.

She added that Game also gave both Vaughn and Tony vouchers valued at R699 each.

Antonio said he didn't expect Vaughn to use his own savings to buy him the bicycle.

"I have a six-year-old son, so I’m very familiar with what boys like to talk about. We talk about boy stuff. I use the bike to get to work sometimes and to exercise.

"The first time we met was when Vaughn was feeling ill. I struck up a conversation with him and told him about how my mother used to care for me. He seemed to love the story.

"I’m really touched by this nice gesture. What a wonderful boy!" said Antonio.

Above all things I regard kindness of heart, and over the years I've tried to live like that and teach my child to do...

Good-hearted staff at a Retail Crossing supermarket in Ruimsig‚ Gauteng‚ are bringing joy every single day to differently abled Brett Nash‚ 14‚ and ...
News
3 years ago

Democratic Alliance MP Phumzile van Damme says her faith in humanity has been restored after an unknown good Samaritan picked up her wedding ring and ...
News
3 years ago

Divine intervention for a Durban pastor came in the form of a soft spoken security guard named Oscar Gumede – who stood guard over R2000 the ...
News
4 years ago

Grace Mnikathi of Willowfontein‚ Pietermaritzburg‚ feeds up to 150 older people in her five-roomed mud home twice a week‚ with no funding from the ...
News
4 years ago