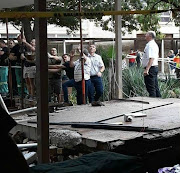 Image: Karina Cloete/Facebook "May God be with these children and their parents as they experience this tragedy," Karina Cloete of KC Silvermoments Photography shared on Facebook.

Teachers and pupils anticipated an exciting day on Friday, with visitors expected and an inter-school trip for a sports team. Instead, Hoërskool Driehoek was struck by tragedy.

A teacher described the incident as tragic.

"The incident happened just after assembly ... It was a very exciting morning as we were hosting an athletics meeting for primary schools in the area and our athletics team was meant to travel to Potchesfstroom," said the teacher, who asked not to be named.

The trip was cancelled and instead community members gathered at the school, united in prayer.

Image: Nonkululeko Njilo School bags in the hall at the Hoerskool Driehoek bear witness to a school day that changed dramatically when a walkway collapsed on Friday. Three pupils were killed and 15 were injured.

"I am shattered. All these kids are like our own," the teacher said.

"Once completed, paramedics assessed the patients and found that three children, aged between 14 and 17, had numerous fatal injuries. Nothing could be done for them and they were declared dead.

"About 15 other patients were assessed, their injuries ranging from minor to critical."

Once treated, four children were airlifted to hospital by a private medical helicopter. The remaining patients were transported by ambulance to various facilities in the area, Meiring said.

The reason for the walkway’s collapse was not immediately known, but all relevant authorities were on the scene to investigate. 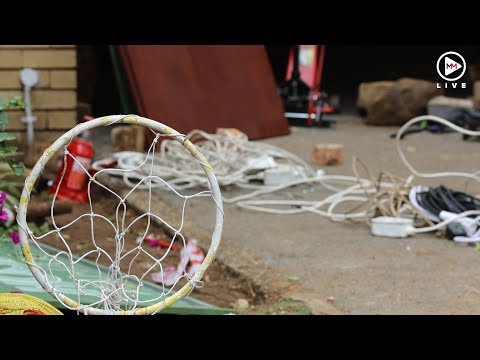