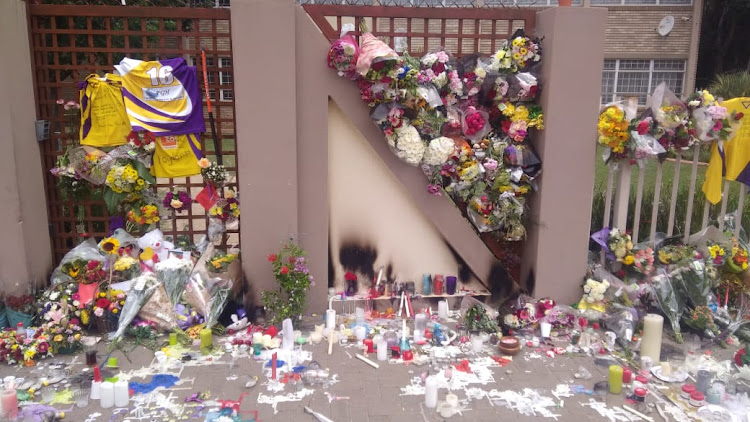 Flowers and messages left at Hoerskool Driehoek in memory of three pupils who were killed when a walkway at the school collapsed on Friday.
Image: NONKULULEKO NJILO

The mood was sombre at Hoërskool Driehoek in Vanderbijlpark as friends, family and community members flocked to the school lapa on Saturday to hear the latest on the tragedy that claimed the lives of three pupils on Friday.

The deceased pupils were identified as Marli Curry, Jandre Steyn and Rayden Olckers.

Gauteng education department HOD Edward Mosuwe confirmed that three learners had been discharged from hospital, and 20 learners were still receiving medical attention after sustaining multiple injuries when a walkway at the school collapsed.

Gauteng education MEC Panyaza Lesufi revealed on Friday that two male schoolchildren and one female schoolchild died when a structure collapsed at ...
News
2 years ago

Mosuwe, who gave feedback on behalf of education MEC Panyaza Lesufi, could not comment on the nature of the injuries. However, reports said the injuries included broken legs.

“The school principal, governing body and the MEC... have been able to go to the different hospitals to go and check on the progress of recuperation that these young people are making. We are satisfied that they are under good healthcare and we wish them a speedy recovery,” he said.

The school would remain closed till further notice.

A grade 9 pupil, who asked not to be named, said he was still in shock.

“Everything happened right next to me. I wish I could have helped, but I didn’t know what to do. Jandre [Steyn] was one of my good friends; I hope he’s in a better place,” he told TimesLIVE.

Lesufi has reportedly given instructions for an independent team of structural engineers to get more information about what could have caused the walkway to collapse.

Three pupils were killed after a walkway collapsed at Hoerskool Driehoek in Vanderbijlpark on February 1 2019. About 15 were injured and five of them are in a critical condition. The pupils were returning to class after assembly when the walkway suddenly collapsed.

The South African Human Rights Commission (SAHRC) says it will hold government accountable after a walk way collapsed at Hoërskool Driehoek School in ...
News
2 years ago

Eighteen dead bodies have been recovered from the debris of an apartment block in Russia that partially collapsed in an apparent explosion, while 23 ...
News
2 years ago