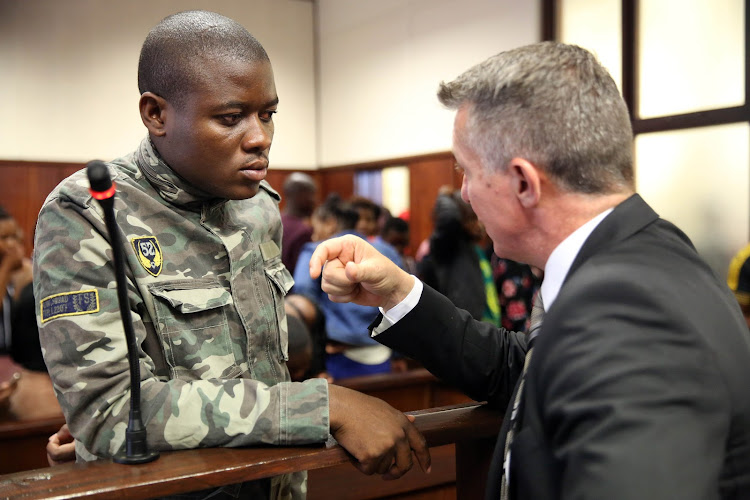 A prediction by convicted student activist Bonginkosi Khanyile that the struggle campaign for free education would rise again rang true on Monday.

The #FeesMustFall activist pleaded guilty to charges of public violence, failing to comply with a police instruction and possession of a dangerous weapon.

The honours graduate, who will be completing a master's degree in public management this year, was sentenced to house arrest and ordered to pay a R5,000 fine or serve a three-year prison sentence (suspended for five years) by the Durban Regional Court last Monday.

After years of fighting in courts, a three-year sentence was handed down to #FeesMustFall activist Bonginkosi Khanyile on Monday, January 28.
News
2 years ago

Speaking after his sentencing last week, Khanyile said the campaign for free education was far from over and predicted that students would continue to take up the cause.

On Monday he tweeted a video of a private security vehicle on fire at the University of KwaZulu-Natal (UKZN) Westville campus, noting that the "KZN shut down continues".

He added that while certain activists may have been silenced, the goal of free education had been planted in the minds of young students.

He responded to criticism that burning things was counterproductive by saying that he wasn't responsible for the burning and that he was only skilled with a slingshot.

You can silence us but idea is with the young ones. pic.twitter.com/hXAaD0fObu

UKZN acting vice-chancellor and principal Prof Nana Poku said that in light of the provincial shutdown of all universities, the executive management had taken a decision to suspend the academic programme with immediate effect until further notice.

"We have received the memorandum from the UKZN SRC, which we are actively working through to try to address the issues being raised. The suspension allows us space to engage the student leadership and deal with the issues while ensuring the safety and security of all concerned," said Poku.

Neither MUT nor DUT had announced a suspension of their academic programmes at the time of publishing.

MUT's senior director of marketing and communications, Mbali Mkhize, said they had noted with concern "inciting messages of mass student protests" by individuals who seemed intent on destroying the gains made by the SRC and management in resolving student issues, including fee concessions and allowances.

The University of KwaZulu-Natal suspended its academic programme with immediate effect on Monday morning following student protests at all campuses.
News
2 years ago

The University of Witwatersrand was on Monday brought to a standstill when a group of protesting students disrupted classes over registration and ...
News
2 years ago