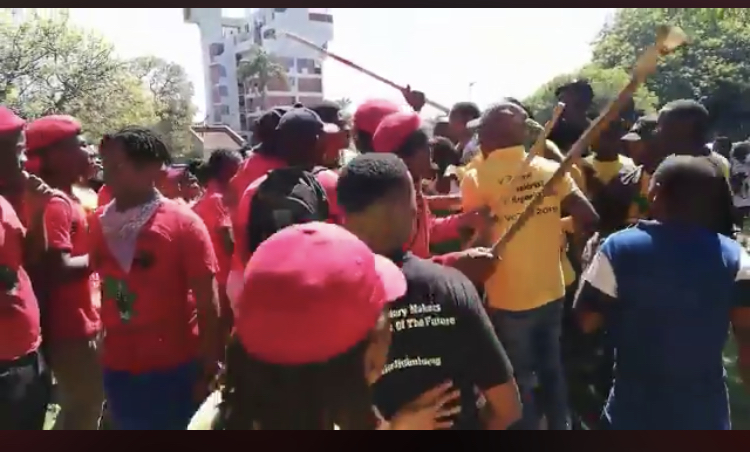 ANC-aligned South African Student Congress (Sasco) students were involved in a scuffle with EFF Student Command students during a protest at the Durban University of Technology on Monday.

A security guard at the Steve Biko Campus in Berea said they had to intervene during the scuffle between the two rival student organisations after several Sasco members were allegedly assaulted with sticks by the EFF members who accused them of interfering with their protest.

The EFF students, who were marching through the campus, threatened to destroy university property if management did not accept and address their memorandum.

The students’ concerns are believed to be related to the ongoing issue of a shortage of student accommodation and NSFAS funding.

Scuffles between EFFSC and SASCO as the EFF led SRC and students at DUT make their why to the Vice Chancellors office to hand over a memorandum of demands @yasantha @TimesLIVE pic.twitter.com/7rKFOrzStm

The students were expected to hand over their memorandum to vice-chancellor and principal Prof Thandwa Mthembu and they vowed to stage a protest until it was accepted. The situation remained volatile but under control on campus.

"As usual we will stay at the sports centre from 9am till 5pm. Management have locked students inside and they want to see us forcing our way inside. They want to see all glasses being destroyed," said an EFF student leader, who didn't want to be identified, via a loud hailer.

“We are not here to destroy. But if they are not allowing us to enter, we are going to the vice-chancellor to submit our memorandum. If they want us to destroy comrades, we're going to destroy. We're not afraid. No matter which system they come with, we know the system. We can't allow the system to brutalise us. We’re very clever by the way, comrades. We're powerful," he said.

He also warned that any Sasco member who misbehaved and disrupted their programme would be dealt with.

"We don’t have a problem to go with them if they are genuine with this struggle. This is not a campaign, we’re fighting for the students. Why are we going to allow criminals to come and harass the president while he is on the podium? We can’t allow that. Those who will be seen disrupting the students’ programme, we’re going to deal with them.

The University of KwaZulu-Natal suspended its academic programme with immediate effect on Monday morning following student protests at all campuses.
News
3 years ago

"We can’t allow comrades who are going to come here and undermine the student leadership. These comrades were elected by students because they knew that they had hope in them. Right now they are fighting for you and these criminals are coming to harass this programme. We are not going to allow that," said the EFF student leader.

A TimesLIVE reporter was prevented by angry students from taking video footage and pictures of the protests, with some arguing that they had been arrested in the past because of video footage shot by the media.

This was in reference to #FeesMustFall activist Bonginkosi Khanyile who was recently sentenced to five years' house arrest and ordered to submit himself to rehabilitation programmes.

Khanyile was identified in a video during the #FeesMustFall protests using a slingshot to stone police.

Last year the EFFSC dislodged Sasco from its dominance of the SRC leadership after winning all eight available seats at DUT.

The institution said on Monday that it had decided to suspend lectures on Tuesday and Wednesday due to the protests. The decision was taken on Monday. However, while lectures had been suspended, the university remained open.

"DUT management will continuously engage the SRC over the next two days to try and resolve the issues that have been raised," a statement read.

About 200 students gathered outside three residences in central Durban on Tuesday, in protest against prevailing conditions at the former hotels.
News
3 years ago

After years of fighting in courts, a three-year sentence was handed down to #FeesMustFall activist Bonginkosi Khanyile on Monday, January 28.
News
3 years ago