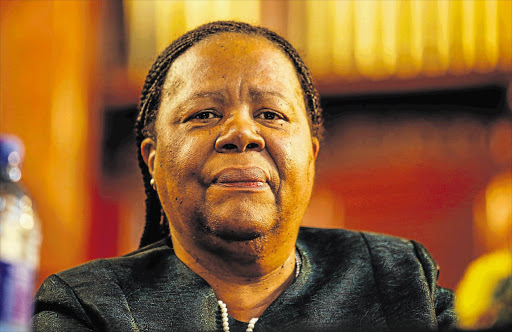 The students’ concerns are believed to be related to the ongoing issue of a shortage of student accommodation and NSFAS funding.

In a statement, Pandor called on students to refrain from disrupting schooling.

"It will severely affect the academic year, resulting in many not being able to finish their degrees on time, if ever," Pandor said.

UKZN acting vice-chancellor and principal Prof Nana Poku said that in light of the provincial shutdown of all universities‚ the executive management had taken a decision to suspend the academic programme with immediate effect until further notice.

"We have received the memorandum from the UKZN SRC‚ which we are actively working through to try to address the issues being raised. The suspension allows us space to engage the student leadership and deal with the issues while ensuring the safety and security of all concerned‚" said Poku.

MUT had not announced a suspension of their academic programmes at the time of publishing, but DUT management said lectures had been halted and would resume on Thursday.

MUT's senior director of marketing and communications‚ Mbali Mkhize‚ said they had noted with concern "inciting messages of mass student protests" by individuals who seemed intent on destroying the gains made by the SRC and management in resolving student issues‚ including fee concessions and allowances.

She said she had directed the NSFAS administrator to prioritise providing responses to all student queries, and has been assured that every query is being addressed urgently.

“I urge all student organisations to focus on real student concerns and to make every effort to resolve problems without impacting on the academic programme” Pandor said.

The University of Witwatersrand was on Monday brought to a standstill when a group of protesting students disrupted classes over registration and ...
News
3 years ago

ANC-aligned South African Student Congress (Sasco) students were involved in a scuffle with EFF Student Command (EFFSC) students during a protest at ...
News
3 years ago