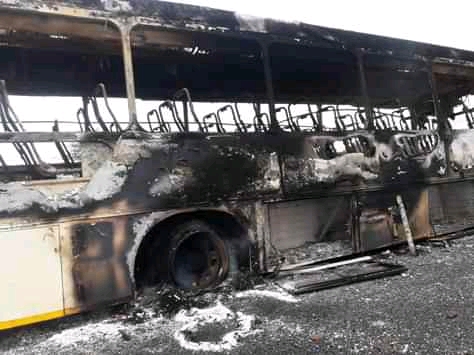 Two buses were set alight during a violent protest in Limpopo on Wednesday.
Image: Supplied

Police have arrested 11 people for public violence and malicious damage to property in Limpopo.

Dipompong village community members took to the streets on Wednesday, barricading several roads with rocks and other objects.

Public order police were deployed to the area to stabilise the situation.

The group is expected to appear in the Phalala Magistrate’s Court soon.

Student leaders at the University of Witwatersrand have vowed to render the institution ungovernable.
News
2 years ago

Protests erupt in Zandspruit after JMPD tears down 'illegal' shacks

Metro police on Tuesday confirmed that Beyers Naudé Drive in Johannesburg was a no-go zone amid violent protest action by locals from nearby ...
News
2 years ago