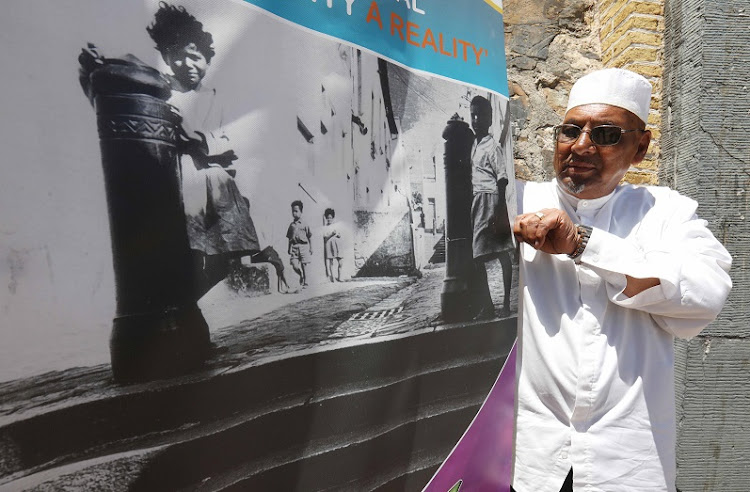 Ebrahima Jonathan, 76, stands by an old photo taken at the famous seven steps in District Six at the 53rd commemoration of forced removals from the area on Monday.
Image: Sunday Times/Esa Alexander

There were strong winds, last-minute load-shedding and no-shows by high-level dignitaries, including President Cyril Ramaphosa.

But none of this could dampen the spirits of District Six claimants at the 53rd commemoration of forced removals from the historic area in central Cape Town.

The event, held on Monday at the Castle of Good Hope, was attended by about 300 of the 3,500 land claimants who are seeking restitution.

It comes three months after the high court in the Western Cape ordered the minister of rural development and land reform to speed up the restitution process, after the District Six Working Committee filed an application claiming that their constitutional rights had been violated.

Catherine Wagner, who has died in Cape Town at the age of 94, was one of the oldest surviving former residents of District Six, which was demolished ...
Opinion & Analysis
3 years ago

Shahied Ajam, head of the committee, said: "The legacy of apartheid is still prevalent. We must reverse that. The political climate is now right, and while we look back into the past, we will also look forward. The history books will be rewritten. You have a story to tell the world."

Cape Town mayor Dan Plato called on people to show unity in the fight for land claims. "Let us all put our politics aside and work together so that no other residents are denied their right to come home," he said to those attending the event.

"The suffering must stop … I want to see houses being built and for you to return to your precious piece of land. It is not possible to return the stolen decades, but we as the city of Cape Town are ready to move, to take your hands."

It is not possible to return the stolen decades, but we as the City of Cape Town are ready to move, to take your hands.

The legal work behind the restitution claims was done pro bono by law firm Norton Rose Fulbright. According to lawyer Nicki van’t Riet, the firm took it on because of their "commitment to human rights".

"On paper, our constitution is there to heal the divisions of the past, but it takes action from government too. Now that there is a court order, it cannot be ignored. Many who were dispossessed are in a desperate situation and the time to act is now," said Van’t Riet.

She and her team will meet the Land Claims Commission on Thursday to discuss the status of the restitution process.

Ebrahima Jonathan, 76, who was forcibly removed from District Six during apartheid, told TimesLIVE: "We lived at 132 Hanover Street in an upstairs house. I lived there all the years, even after I was married. We have been waiting for housing for so long. We have been waiting and waiting up until now."

Recalling life in District Six before the forced removals, he said: “We all lived peacefully together - Christians, Muslims, Hindus, Jews; blacks, whites and coloureds. My kids were your kids. That was how we lived."

For the past two weeks‚ sunsets in Cape Town’s traditional “Malay quarter” — Bo-Kaap — have been obscured by three pillars of black smoke.
News
4 years ago

President Cyril Ramaphosa has been urged to appoint a commission of inquiry into “political interference” that scuppered the prosecution of ...
News
3 years ago