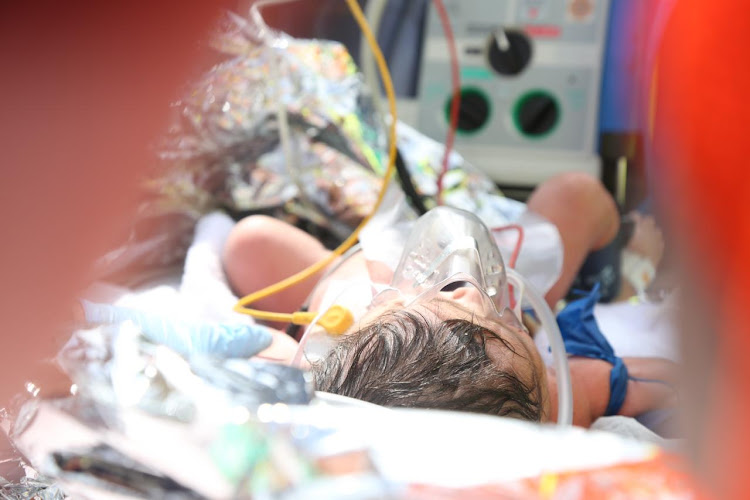 Emergency workers worked furiously for about three hours to rescue a newborn baby from a storm water drain after a resident heard her cries.
Image: Jackie Clausen

When Newlands East, Durban, resident Iyron Lovedale first heard the faint cries of a newborn baby girl trapped in a storm-water drain, he thought it was a "kitty cat".

"I went and opened the drain and I went down and I looked. I thought no, it sounds like a kitty cat and I looked further down and saw it was a baby," said Lovedale.

Lovedale was speaking to TimesLIVE at the intersection of Barracuda Drive and Herring Circle in Newlands East, outside Durban, on Monday morning. This was the site where emergency services conducted a harrowing three-hour rescue of a newborn baby girl with the placenta still attached, who had been trapped down the drain.

The faint cries of a baby, believed to a newborn, trapped in a stormwater drain could be heard as Durban emergency workers battled to reach the ...
News
3 years ago

A emergency worker who was on scene said: "A 2m trench was excavated using an earth mover. Once the walls of the trench were shored, the pipe was broken open to remove the baby."

Lovedale, who has nicknamed the baby "Storm", was elated when the newborn was finally pulled out of the drain.

"I have a kid so I understand. I am just happy that the baby is alive," he said.

The newborn was stabilised on scene and flown to Albert Luthuli Hospital.

A baby girl survived being abandoned in a dustbin in Nkandla by her mother - the latest in a string of similar incidents in KZN.
News
3 years ago

Pretoria police have asked the public to help them find Lebogang Botolo, who could assist them in solving the case of a three-week-old baby who was ...
News
3 years ago

'I was an abandoned baby - now I'm a graduate': Man's letter to children's shelter will give you the feels

Nathanael Stahler thanked the women who cared for him after he was abandoned on the side of the road as a baby.
News
3 years ago