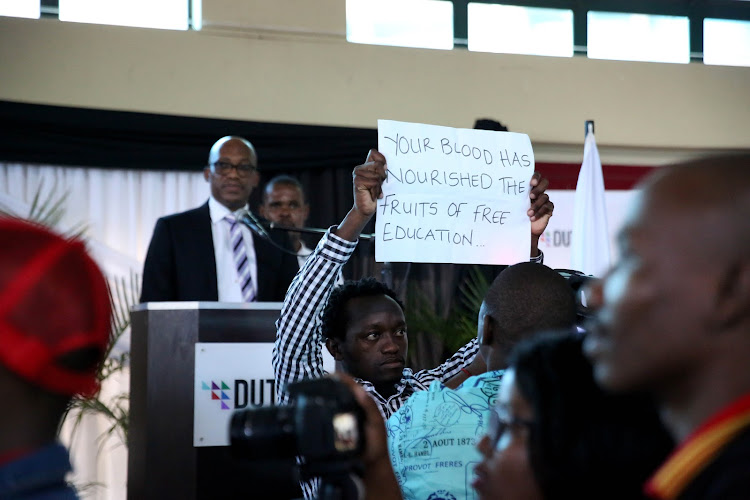 DUT vice-chancellor Thandwa Mthembu had to be escorted off stage by security when protesting students prevented him from speaking at the memorial of Mlungisi Madonsela.
Image: THULI DLAMINI

Durban University of Technology (DUT) vice-chancellor Prof Thandwa Mthembu was bustled off the stage on Tuesday after attempting to address students at the memorial of Mlungisi Madonsela, who died after being shot at the university last week.

Mthembu was set to be the last speaker at the memorial, held at the university's Ritson Hall on Tuesday, when students stood in front of the stage carrying placards with messages such as "DUT stop protecting killers", "Rest in power" and "Our only sin is being black".

Students began chanting "What did Mlu do?" in a scene that resembled the demonstration by four women who staged a silent protest against former president Jacob Zuma during the announcement of the 2016 election results.

The streets outside the Durban University of Technology (DUT) were painted red on Tuesday as EFF Student Command members marched in honour of slain ...
News
2 years ago

Mthembu was immediately escorted out of the building to his car by two bodyguards.

Previous speakers included EFF MP Marshall Dlamini, who was recently involved in an alleged altercation with a security detail at the opening of parliament last week, as well EFF KZN chairman Vusi Khoza.

Protesters also prevented the university's dean of students, Dr Johannes Nkonoane, from speaking by breaking into song, forcing him to sit down. But it was Mthembu who bore the brunt of the students' anger - they booed loudly every time his name was mentioned.

Madonsela was shot during clashes between students and private security outside the university’s Steve Biko campus last week. He will be laid to rest on Thursday in Jozini, northern KZN.

DUT to reopen on Monday after death of student

The Durban University of Technology (DUT) is expected to reopen its doors for registration and administration after a four-day shutdown in the ...
News
2 years ago

DUT meets with SRC as another college protests over accommodation

The troubled Durban University of Technology management is to meet with the EFF-led SRC on Thursday to discuss ways to resolve the volatile situation ...
News
2 years ago

Two security guards have been suspended following the fatal shooting of a student at the Durban University of Technology.
News
2 years ago