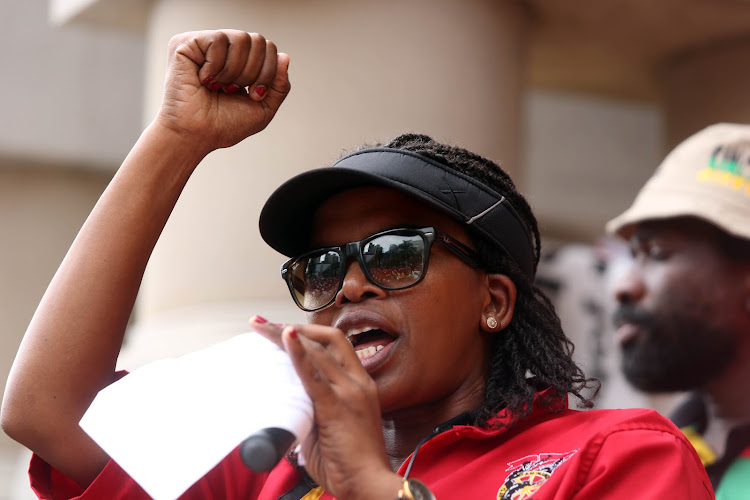 The Congress of South African Trade Unions (Cosatu) is ready to engage the government on Eskom’s unbundling - but on the condition that there is no privatisation, no job losses and no electricity price hikes.

Addressing thousands of Cosatu members during a march in Durban on Wednesday, the labour federation president Zingiswa Losi called on the ANC government not to abdicate its responsibility to generate electricity to the private sector.

"As Cosatu, we said we're ready to engage with the ANC government about this unbundling of Eskom, but we must agree on three things with the government: that you may call it whatever you want to call it, but jobs must not be lost; electricity costs must not go up; and we don’t want privatisation," said Losi.

She said it would be a disaster if the ANC government allowed the private sector to produce electricity for SA.

"The ANC government must never abdicate its responsibility to generate electricity. It [would be] a disaster, because if capitalists want to go on an investment strike, they will make sure that they are not producing electricity and this country will come to a standstill, as we are experiencing," she said.

Cosatu in Gauteng has lamented what it terms "the resurfacing of the 1996 class project" in the ANC government - a project the trade union federation ...
Politics
3 years ago

Losi said the challenges facing Eskom required all South Africans to come up with solutions. "The problem that we have in Eskom, it is a problem that will need us South Africans to come with solutions. If people who have a responsibility at Eskom to ensure that the lights are on in SA can’t do their job, they must face disciplinary processes because they are being paid."

The Cosatu president said they were also buoyed by ANC secretary-general Ace Magashule’s recent statement that the ruling party stood by workers in opposing Eskom's privatisation.

"We’re waiting for the capitalists to give us a moratorium on retrenchments." 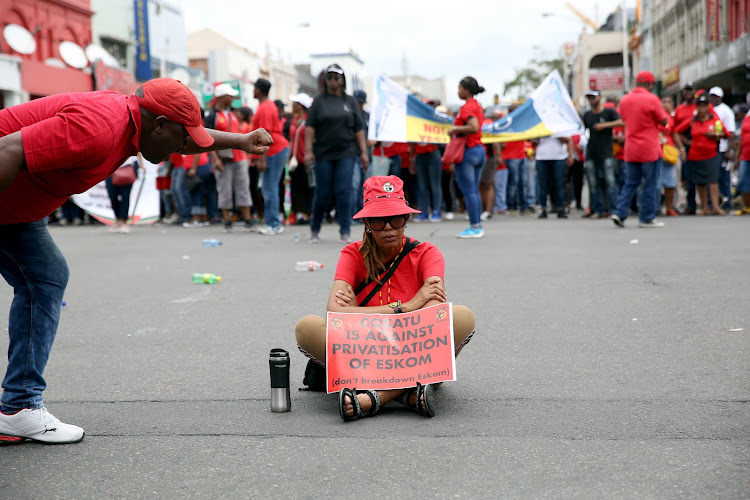 A Cosatu member makes her point against the privatisation of Eskom during a march in Durban.
Image: THULI DLAMINI

Losi also revealed that Cosatu had intervened in a bid to save 140,000 jobs in the textile and retail sector by instructing the ANC in parliament to speak to the Unemployment Insurance Fund (UIF) board and the Public Investment Corporation (PIC) to save the Edcon group. The UIF board and PIC have until Friday to save the 140,000 jobs, she said.

"Retrenchments, job losses, unemployment - we are not going tolerate in SA," said Losi.

As the Congress of South African Trade Unions embarked on a national strike on Wednesday to highlight high unemployment rates, an economist has ...
Business Times
3 years ago

The demands Cosatu presented in a memorandum to the KZN provincial government include:

The memorandum was accepted by Mxolisi Kaunda, KZN MEC for transport, community safety and liaison.

Cosatu also reiterated its call for a ban on labour brokers, which it described as "modern day slavery".

"One of the reasons for having the department of labour is precisely to link job seekers with prospective employers without a fee and the violation of workers' labour rights," said the federation.

Nurses expected to down tools in support of Cosatu strike

As SA wakes up to the threat of a massive strike against job losses, nurses affiliated to the Democratic Nursing Organisation of SA (Denosa) said ...
News
3 years ago

Cosatu in Gauteng has cautioned the ANC to change its attitude towards the proposed reconfiguration of the tripartite alliance, saying failure to ...
Politics
3 years ago

Load-shedding will continue on Wednesday as Eskom continues with stage 3 power cuts.
News
3 years ago