WATCH | Doctors sing for healing and people love it! 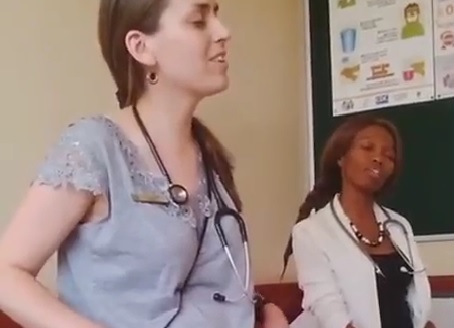 Two young female doctors are warming the hearts of many with their rendition of the gospel hymn Phind’ukhulume moya oyingcwele, which loosely translates as "speak again, holy spirit".

The duo is captured singing in harmony while sitting on a hospital bed. The video, posted by Christo Thurston, was shared and liked more than 25,000 times on Twitter and has received 4,745 views on Instagram since Wednesday morning.

Phind'ukhulume - The singing and praying doctors

Positive responses flowed from people who watched the clip, with the doctors receiving praise for their "angelic" voices.

Some Twitter users commented that they would be happy to be treated at the hospital where the doctors work because healing seemed certain.

Jolene Mojela responded via Instagram, saying: "The lives of our patients are definitely in good hands. #Holistic approach."

His sentiment was shared by many, who encouraged other South Africans to adopt a similar approach.

Oohh my Goodnes, this heals my soul in so many ways. I smiled at the end of this clip, because the harmony here is heaven. Wowza! 🙌

This is so beautiful, this is the South Africa I want to live in...

South Africans on Wednesday applauded a young white woman who posted a video of herself offering advice in siSwati on showing kindness towards people ...
News
2 years ago

'Pushing against all odds' - Seven friends qualify as doctors

A group of young female friends who have qualified as doctors from the University of Free State, are ready to step up and bring about change.
News
3 years ago