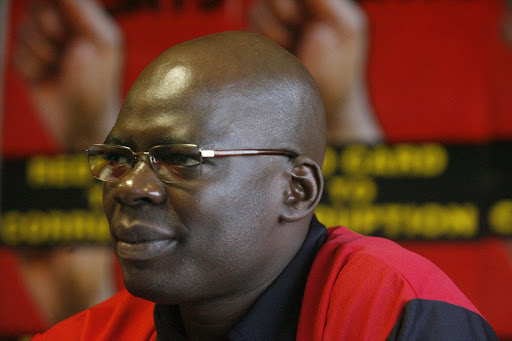 Solly Mapaila has come under fire for his comments on Robert Sobukwe's incarceration on Robben Island.
Image: Gallo Images/Sowetan/Mohau Mofokeng

News24 said Mapaila made the remarks during his address at a dialogue celebrating the Rivonia trialists at Liliesleaf farm in Rivonia, Johannesburg, on Tuesday.

In an interview with eNCA on Wednesday, Mapaila said: “I was not blaming Robert Sobukwe, I was blaming the apartheid government and his collusion and his participation in that regard. For instance, they put him in a house on Robben Island, they treated him as the main political prisoner when others were treated as terrorists and slaves.”

Mapaila said other political prisoners on Robben Island were forced to do hard labour, while Sobukwe had “privileges”, like receiving clothing and books.

The SACP general-secretary received backlash over his comments as he trended on Twitter:

#SollyMapaila He is deteriorating at an alarming rate. If we think Lekota is a factory fault then this Comrade is becoming a faulty factory himself. He should not be allowed to reproduce. pic.twitter.com/THA0pyWON6

@SollyMapaila Robert Sobukwe was not given preferential treatment. You got wrong on this one. We know that you have to sing for your supper.

People should not be surprised by what Solly Mapaila said about Robert Sobukwe. Things like this we should expect from fake leaders who call themselves communists. Robert Sobukwe was and will always be a true revolutionary who stood firm in his beliefs

What I heard about Robert Sobukwe is that, at some point he seemed to have abandoned the struggle and wanted to go teach in America after he was offered a teaching position there. First time I am hearing what Solly Mapaila is saying. pic.twitter.com/h8KU6LfFGT

Solly Mapaila must just retract his statement about Robert Sobukwe.

Solly is preoccupy with Robert Sobukwe instead of redirecring his energy to the so called alliance where they are treated with perpetual political adolences. One's had respect for u but it's all gone

The Department of Correctional Services (DCS) launched the Mandela Rules last week at Drakenstein Correctional Centre in the Western Cape, where the ...
News
2 years ago
Next Article