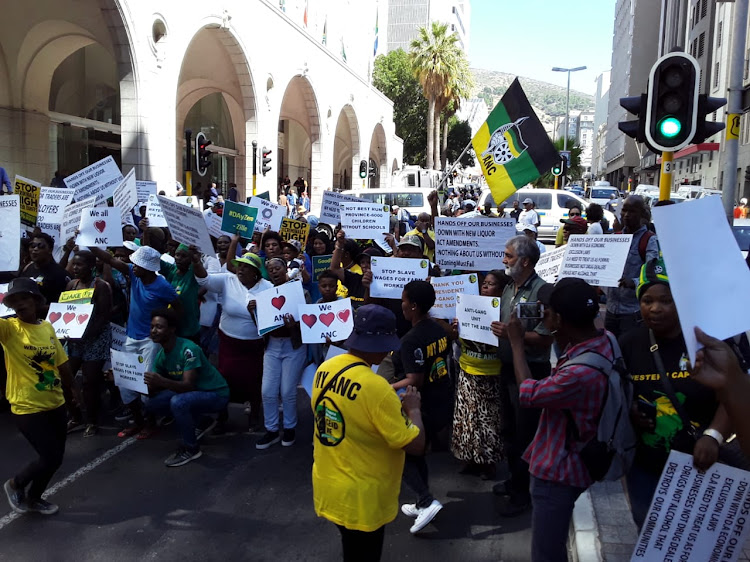 ANC protesters came from as far away as George to demonstrate outside the provincial legislature during premier Helen Zille's last state of the province address in Cape Town on Friday February 15 2019.
Image: Aron Hyman

About 350 ANC protesters shut down Wale Street outside the Western Cape provincial legislature in Cape Town during premier Helen Zille's state of the province address on Friday.

KhoiSan leaders performed a cleansing ceremony in front of the legislature steps to "lay Zille to rest".

Protesters held up posters calling for the deployment of the police's anti-gang unit and not the army in gang-ridden areas.

A speaker introduced former premier Ebrahim Rasool, asserting that Cape Town had enjoyed its five "best years" under his leadership.

Speaking from the back of a trailer, Rasool said that under his leadership the province had its lowest unemployment figures.

"The unemployment went up again after 2007 and it will go down again under President Ramaphosa," said Rasool.

The ANC calls for an occupation of Wale Street and applies for a permit for 3000 people. What a damp squib. What an embarrassment Mr Brown Env Rasool. I recon there are 200 to 300 people mobilized. pic.twitter.com/DahBBIGv1V

He said the ANC would expropriate land in urban areas in Cape Town and hand it over to domestic workers and working class people who were forced to take "dangerous" forms of public transport to work.

Slogans on some of the posters said "Hands off Bo-Kaap".

A large number of protesters held up posters to demand that "liquor vendors" be left alone.

They said that if liquor vendors weren't allowed to sell alcohol in townships then they would not allow wholesalers such as Pick n Pay to operate there.

Rasool pleaded with the crowd to vote for the ANC in the upcoming elections saying, "This is not the Zuma ANC. This is the Ramaphosa ANC."

Protesters came from as far away as George.

For most of them the real issues were around housing and service delivery.

Mervin Olivier was one of 45 protesters who arrived from George. He said that their grievances were about corruption related to housing in the Garden Route town.

"They are evicting people in George," said Olivier.

Thobani Mooi was another protester who came from a farming area in Drakenstein municipality where he said people were being evicted by Zille's government.

"We have lost hope in the premier. We are waiting, the people of the Western Cape, to vote her out and her cabinet," said Mooi.

Police outnumbered protesters outside the Western Cape provincial legislature on Friday, where the opposition ANC had vowed to close the road.
Politics
2 years ago

ANC has lost its morals in past 10 years, says Ebrahim Rasool

Alan Winde hopes to succeed Helen Zille as the premier of the Western Cape in May. But he says that will only be the beginning of what he sees as his ...
Politics
2 years ago