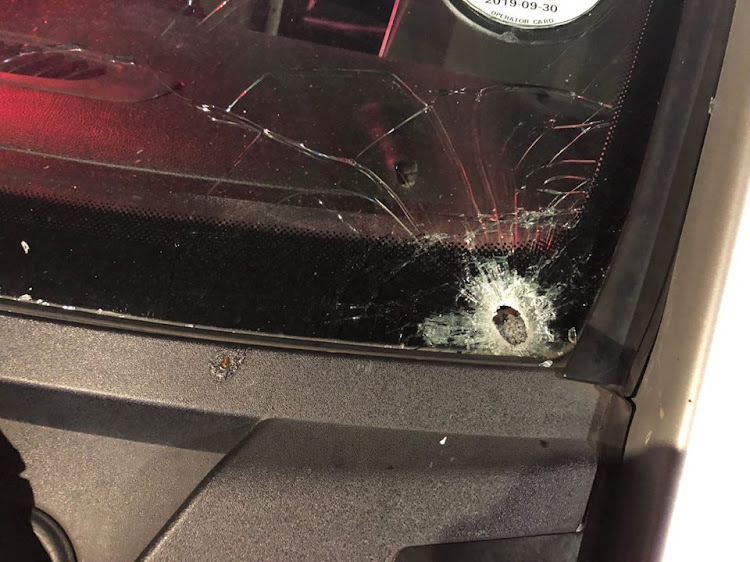 The driver of this vehicle was driving a family he had picked up at the airport when they came under attack by robbers on February 16 2019. He was wounded but is in a stable condition in hospital.
Image: Suburban Control Centre

A driver was shot when a family was followed home by robbers from the OR Tambo International Airport in Johannesburg over the weekend, a security company says.

In the latest of a series of "follow-home" robberies, the Suburban Control Centre and Intelligence Bureau SA said the incident occurred on Saturday February 16.

The family and their driver were accosted by four robbers in Smuts Avenue, Waterval Estate, Northcliff.

Two shots were fired by the suspects.

The driver of their transport company later stopped at the Engen garage at Northcliff Corner, just down the road, after realising that he had been shot.

"The driver is in a stable condition," after being transported to hospital by ER24 paramedics.

The suspects made their getaway in a white Toyota Corolla.

Four suspects have been arrested in connection with robberies involving the following home of their victims from the OR Tambo International Airport ...
News
2 years ago

Second OR Tambo airport follow-home robbery in one week

A motorist and his passengers have been robbed at gunpoint after being followed from Johannesburg's OR Tambo International Airport - the second time ...
News
2 years ago

The police made a major breakthrough in what has been dubbed the "airport-following" robberies, committed in and around Johannesburg, arresting six ...
News
3 years ago