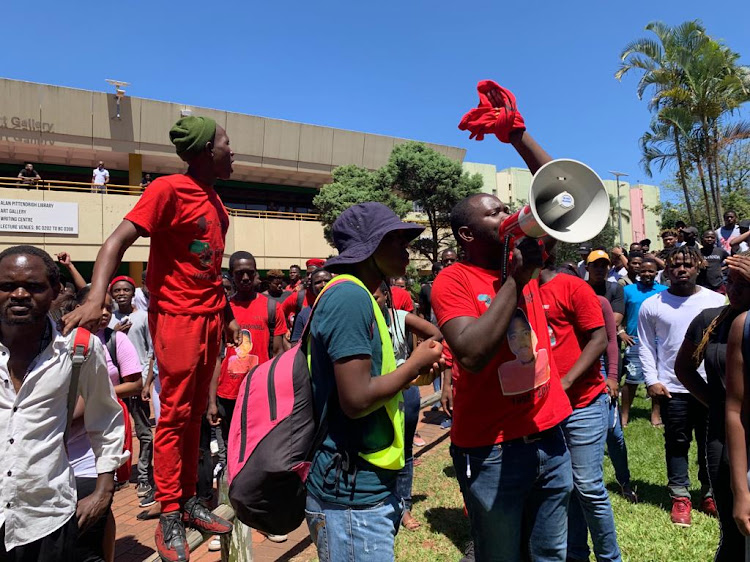 Via loudspeaker, leaders asked students who did not want to protest to leave the campus or they would be "dealt with decisively".

DUT management said that lectures were due to resume on Monday, as per a recommendation by the SRC.

However, the EFFSC told TimesLIVE that they were embarking on a protest march to the Durban city hall in honour of slain student Mlungisi Madonsela.

DUT student making there way down Steve Biko road en route to City hall to hand over a memorandum of demands relating to the death of Mlungisi Madonsela @TimesLIVE @yasantha pic.twitter.com/IqC2BHtUW7

Madonsela was shot following an altercation with security at the campus two weeks ago after students embarked on a protest to highlight a number of grievances including safety, NSFAS funding and accommodation.

He was buried at his home in Jozini in northern KwaZulu-Natal on Thursday.

Students alleged that the DUT management had not contributed financially to his family.

However, DUT, in a statement issued on Saturday, denied this accusation.

DUT management called an emergency meeting with the SRC on Sunday, however the meeting was rescheduled to Monday after a number of SRC members didn't attend.

"Regarding the alleged student protest, the university management will only issue a further communique once it has concluded the meeting with the SRC this morning (Monday)," DUT told TimesLIVE.

Embattled DUT to resume lectures after death of student

It will be business as usual at the embattled Durban University of Technology (DUT) when lectures resume on February 18.
News
2 years ago

The streets outside the Durban University of Technology (DUT) were painted red on Tuesday as EFF Student Command members marched in honour of slain ...
News
2 years ago