Six looting incidents that will leave you shooketh 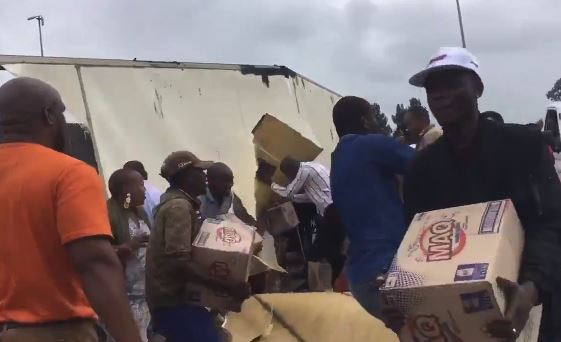 People looting an overturned truck on the N1 on Saturday.
Image: Msibi'City via Twitter

Images of looting in South African have been widely shared on social media, with a video of the most recent incident showing a truck filled with washing powder being robbed.

Hundreds of people went on a washing powder looting spree on Saturday afternoon, February 16, after a truck loaded with the detergent overturned on the N1 North in Johannesburg.

Police spokesperson Mavela Masondo said a case of malicious damage to property had been opened and no arrests had been made, as an investigation was still ongoing.

It was raining washing powder on the N1 north in Johannesburg on Saturday afternoon, with traffic reported to be at a standstill after a truck ...
News
2 years ago

Just three weeks ago, disgruntled community members of Orient Hills in Magaliesburg petrol-bombed and looted a train during the elections registration weekend.

The incident led to some voting stations in the area not opening for voter registration.

A train has been petrol bombed and looted in the small town of Orient Hills near Krugersdorp, west of Johannesburg.
News
2 years ago

A Cape Town cycling shop fell victim to burglary and looting in December, when thieves gained entry into their premises.

CCTV footage shared by the shop owners showed people entering the shop through the window and quickly helping themselves to the equipment.

Some could be seen making off with bicycles while others stole other accessories in their sight.

A bicycle shop in Long Street, Cape Town shared a video of how their shop was looted in the early hours of Monday morning on their Facebook page.
News
3 years ago

Food items such as rice, samp and mealie-meal were looted when a truck carrying food items overturned on the N6 between Catchcart and Stutterheim in the Eastern Cape  one month ago.

There was a heavy police presence at the scene, and a case of reckless and negligent driving was opened against the truck driver.

None of the looters was reported to have been arrested.

Motorists helped themselves to food products from a truck that overturned on the N6 between Cathcart and Stutterheim in the Eastern Cape on Thursday ...
News
3 years ago

A vodacom shop in Limpopo Mall of the North was looted and vandalised in December 2018.

The looters, who were allegedly EFF supporters, broke into the shop following a speech that was made at the Vodacom Journalist of the Year awards in which the EFF was criticised.

The Human Rights Commission condemned the incident, saying the party should have used proper mechanisms to launch a complaint.

The SA Human Rights Commission has added its voice to the condemnation of the looting and vandalism of the Vodacom store at the Mall of the North in ...
News
3 years ago

Various food items were stolen from local shops owned by foreign nationals as the Tshepisong community in Soweto embarked on several protests in August 2018.

The community was alleging that they were being sold expired and fake food items at the shops.

Nolulama Mcwerha, a 34-year-old mother of four was shot during the looting.

Tshepisong looting victim was a mother of four

The husband of a woman who was shot and killed when residents of Tshepisong‚ on the West Rand‚ allegedly looted foreign-owned shops is so heartbroken ...
News
3 years ago