Even empty threats could be outlawed by 'over-broad' law, ConCourt hears 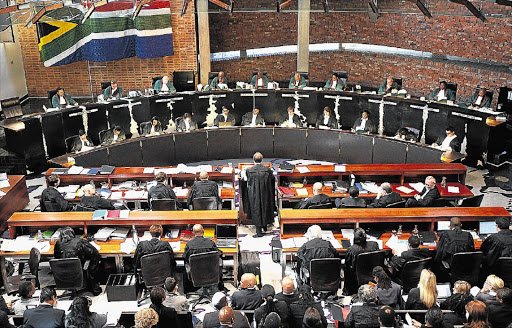 The Constitutional Court is hearing submissions on the promulgation of the Intimidation Act.
Image: ALON SKUY

Consumer boycotts, rowdy protests, passionate advocacy for land redistribution and colourful threats - even without real intent - to harm politicians could be criminalised if the Intimidation Act is given the all-clear.

These, and a range of non-violent expressions protected by the constitutional right of freedom of expression, are in conflict with the Intimidation Act, which criminalises such expressions.

This was the submission by Gen Alfred Moyo and the Centre for Applied Legal Studies to the Constitutional Court on Tuesday. Moyo and the centre want the court to declare that Section 1(1)b of the Act is unconstitutional.

The section criminalises any speech or conduct which creates a subjective fear in any person, regardless of whether the conduct or speech in question is intended to create fear.

This case has its genesis in the case laid against Moyo following a complaint by the station commander of Primrose police station in Germiston, Lt-Col Thembi Nkhwashu, and her assistant in 2012.

The charge, in terms of the act, is that Moyo made statements to the effect that he would make sure that the commander and her assistant were removed and that they would not last long at Primrose, and threatening to repeat what happened at Marikana in 2012.

Apartheid legal relic goes down in flames at appeal court

One of the apartheid regime’s “last and most insidious efforts to curtail freedom of expression and political action” has been declared ...
News
3 years ago

Moyo, a resident of Makause informal settlement in Germiston and chair of the Makause Community Development Forum, denied that he did or said anything with the intention of intimidating the complainants. In his view, the charges against him were a ploy to frustrate the forum from voicing its concern about policing in the Germiston area.

The criminal case against Moyo has been put on hold at the Germiston magistrate's court as the constitutional challenge against the section of the Intimidation Act goes through the higher courts.

Stuart Wilson, for Moyo and the centre, told the Constitutional Court on Tuesday that the section under challenge was over-broad and interfered with the right of freedom of expression.

"It criminalises conduct that ought not to be criminalised," Wilson said.

He said the act promoted intolerance by making it easy to criminalise expressive acts that did no more than cause offence.

Wilson also disagreed with the finding by the Supreme Court of Appeals (SCA) in June that the section served the valuable purpose of providing the protection of the criminal law against intimidatory conduct, such as stalking, trolling attacks on social media, cyber attacks and the like.

Steve Hofmeyr on backlash over apartheid-era flag: SA's in denial of 'rot under the new flag'

Steve Hofmeyr sparked outrage with a picture of the old apartheid flag.
TshisaLIVE
3 years ago

On the evening of November 23, Tiso Blackstar political journalist Ranjeni Munusamy was at a Johannesburg store when three men – who she did not know ...
News
3 years ago

However, Wilson argued that the Protection From Harassment Act protected the public from such attacks.

The Right to Know Campaign, which was admitted as a friend of the court, said the Protection From Harassment Act provided greater protection for victims of harassment as victims could apply for a protection order.

However, Piet de Jager SC, for the minister of police, said the minister agreed with the judgment of the SCA, that the section was not unconstitutional.

De Jager said the trial court, when dealing with the matter, would not ordinarily accept the complainant's version that he or she feared for her life.

De Jager said the court would still have to determine whether a reasonable person in the same position would have feared for his or her life.

President Cyril Ramaphosa and the Democratic Alliance will go head to head in the Constitutional Court on Thursday over whether the president must ...
Politics
3 years ago

The South African Human Rights Commission said on Tuesday that it was appalled by some comments posted on social media in the wake of the Hoërskool ...
News
3 years ago