Chicken Licken’s attempt to save a banned TV ad about colonialism has failed.

The appeal committee of the Advertising Regulatory Board has upheld an earlier ruling that the “Big Mjohnana” ad was offensive and must never be aired again. 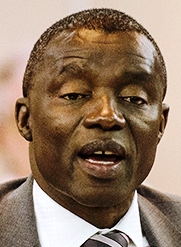 The committee, chaired by Advocate Gcina Malindi SC, said colonialism was a no-go zone when it came to humorous or glamorous depictions.

Colonialism came with “attendant crimes and devastation in the forms of genocide, murder, maiming, sexual abuse, slavery, and subjugation of the native populations of the colonised countries”, the committee said in its ruling.

In the advert, a young man called Big Mjohnana sails away from his village in 1650 to satisfy his hunger for adventure. The following year, he “discovers” Europe and a man looking like Jan van Riebeeck.

The ARB banned the ad in December 2018 after viewer Sandile Cele complained it “makes a mockery of the struggles of the African people against the colonisation by the Europeans in general, and the persecutions suffered at the hands of the Dutch in particular”.

Pepe Marais, the founding partner of advertising agency Joe Public, told the appeal committee in January that the ad did not allude to slavery and colonialism, but was about an adventure meant to inspire South Africans.

“By definition, the commercial is 60 seconds. Ninety percent of the 60 seconds shows Big Mjohnana travelling, doing amazing things, feeding a panther on an island, fighting with a jellyfish. It is completely like a fantasy land.

The Chicken Licken advert called Big Mjohnana, which caused a stir last year following a complaint that it was offensive, was in fact not about ...
News
2 years ago

“And in the end he just so happens to land on the shore of a foreign land. This is the only part of the commercial that could potentially refer to colonisation,” he told the appeal committee, which also included three ad industry representatives, Eloise Kelly, Mxolisi Buthelezi and Jarred Cinman.

Marais said in the two weeks the advert aired before being pulled, it reached four million viewers – and no one mentioned colonialism in any feedback. The only negative remark about the ad on Facebook out of 1,300 comments was that Chicken Licken was “too salty”.

But the appeal committee said by depicting colonialism the ad crossed the same line as those who might use the Holocaust, human trafficking, sexual violence and murder as a source of humour.

“The fact that the advertisement was found by many commentators on social media as funny and humorous, empowering and not referring to colonialism, is not a sufficient yardstick to find it acceptable,” said the committee.

“There can be no plethora of evidence that will make it reasonable and justifiable to attack and erase a people’s dignity by satirising sexual abuse and violence, human trafficking, murder and genocide.”

As the conversation over a Chicken Licken commercial heats up, the fast-food outlet confirmed it will appeal the ruling which deemed it too spicy.
News
2 years ago

Nando's and Chicken Licken steal the show at advertising awards

Chicken was an unlikely hero at this year's Loerie awards‚ which recognise creative excellence in the advertising and communications industry.
News
2 years ago