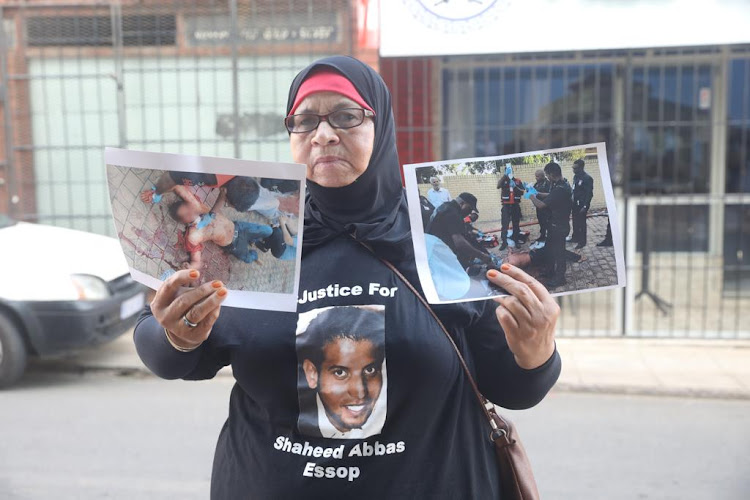 The mother of Shaheed Abbas stands in silent protest outside the Verulam magistrate's court, where the men accused of killing her son in a mosque attack appeared on Friday, February 22
Image: JACKIE CLAUSEN

Additional terrorism-related charges have been added to the case against the 12 men accused of orchestrating the bloody Verulam mosque attack and a wave of alleged Isis-inspired firebomb attacks.

These are linked to firebomb incidents at Woolworths stores and at last year's Durban July.

The men also face various charges‚ including  for murder‚ attempted murder‚ arson and extortion.  They  were arrested in a coordinated Hawks raid on October 5.

The men stand accused of being aligned to terror group Islamic State, with Hoomer allegedly orchestrating the fatal Verulam mosque attack in May, as well as a series of firebomb attacks at retail outlets in the months that followed. 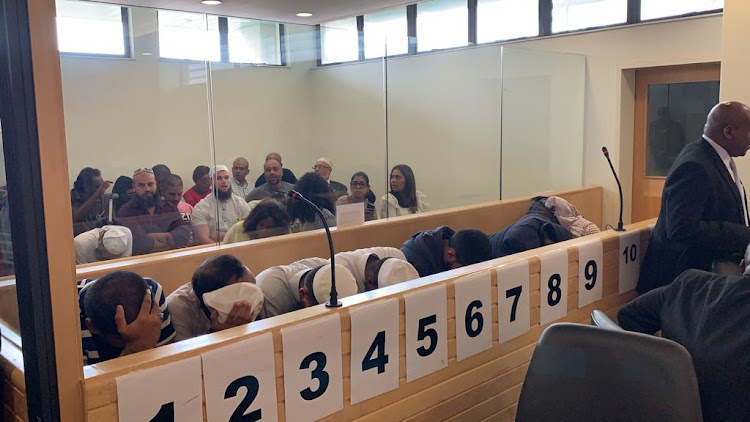 The alleged ISIS loyalists who are facing a raft of charges including murder and attempted murder appeared in the Verulam Magistrate's court on Friday, February 22
Image: JACKIE CLAUSEN

Specialist prosecutor advocate Adele Barnard told the court that the state was also planning on lodging an application to have the case remanded for six months for further investigation.

Advocate Jimmy Howse, who represents Hoomer, was not pleased by the state's intention to postpone the case further.

"The clock is ticking from today for the state to finalise this matter... I am putting the state on notice (the application) will be opposed," said Howse.

The matter will be back in court on April 15.

Meanwhile, the mother of  Shaheed Abbas Essop stood outside the court holding up photos of the bloody scene where her son was killed.

Abbas was one of the casualties at that Imam Hussain Mosque in May when three knife-wielding men stormed the mosque in Ottawa‚ Verulam‚ after midday prayers – targeting the imam and two others.

Abbas, a mechanic at the  workshop across the road from the mosque, had charged into the building after the men began attacking worshippers. When Abbas intervened, the attackers duct-taped his mouth and slit his throat. He died in hospital.