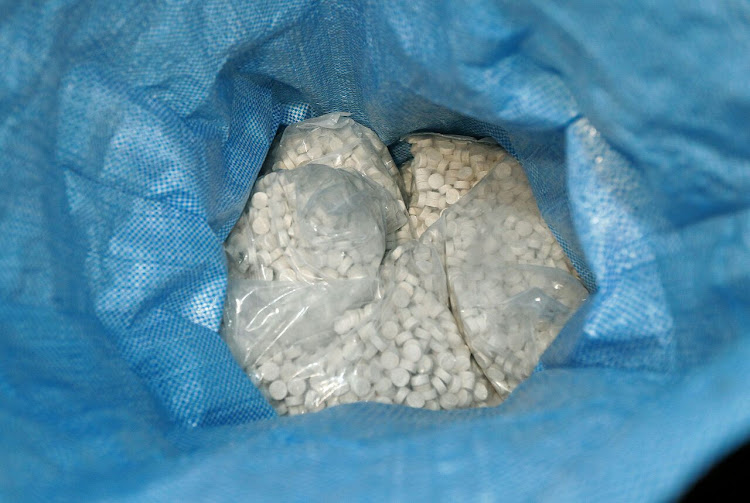 An alleged drug dealer has been arrested by police after parking a car loaded with drugs outside a police station.
Image: Supplied by SAPS

The audacity of a drug dealer who parked a vehicle loaded with drugs in front of a police station has cost him his freedom, police said on Monday.

A prisoner was being transported to court by members of the anti-gang unit in Cape Town when they noticed a suspicious vehicle parked in front of the Muizenberg police station.

"They recognised the driver of the vehicle, who is known to have links with a local gang in the area. With him in the vehicle was a female passenger, who was making an appearance on a drug dealing charge at Muizenberg court," said police spokesperson Lieutenant-Colonel Andrè Traut.

"The driver, on noting the police, attempted to evade the SAPS members by reversing down the street. The members forced the vehicle to stop and proceeded with a search of the car.

"In the rear of the vehicle, they discovered a plastic bag containing 104 mandrax tablets, five large sticks of compressed dagga and three packets of tik. Sealed inside a 1kg packet of sugar and 1kg packet of maize meal, they found two cellular telephones wrapped in plastic. Two packets of tobacco were also found containing three cellular sim cards."

Cash, ear phones and cellular telephone cables were also found. Police suspect they were destined to be smuggled into a local prison.

The man, 48, and female, 23, from Hillview were promptly arrested on charges of dealing in narcotics – and detained at Muizenberg police station.

The one who didn't get away: fleeing thief falls from 2nd floor, breaks a leg

A thief who snatched a cellphone and fled did not have a leg to stand on when he was confronted about the robbery.
News
3 years ago

A man was electrocuted while allegedly trying to steal cables from a power substation in Johannesburg.
News
3 years ago

A man was arrested last week for trying to steal a bike that was locked up outside a police station.
News
3 years ago

Show us how you did it: Police and security services got an alleged burglar who wiggled his way through a security gate at a primary school in ...
News
3 years ago