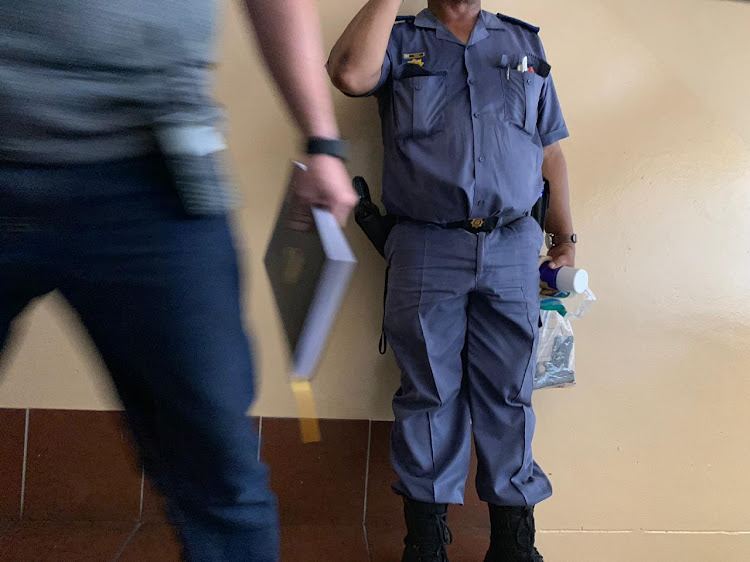 Police have recovered the firearm used in a fatal shooting at a block of flats in central Durban. One of those killed was an off-duty metro policeman.
Image: Jackie Clausen

Paramedics who responded to a shooting at a block of flats in the city centre near the Durban high court describe the scene as a "bloodbath".

While initial reports by paramedics put the death toll at four, Rescue Care's Garrith Jamieson told TimesLIVE that three people - including a Durban metro cop - had died during the shooting at the Teesav building in JN Singh Road.

"On arrival, paramedics were escorted to the apartment and were faced with an absolute bloodbath. Out of the nine, three were fatal - two men and one woman," said Jamieson.

Five others were injured in the shooting, while a sixth escaped unharmed. The survivors were transported to various hospitals for treatment.

He confirmed that one of the dead was an off-duty policeman.

Residents told TimesLIVE that the shooting occurred around midday after an argument broke out in one of the flats. They said the nine people were in the same apartment in the four-storey block.

A woman who lives in the building was still visibly shocked when she told TimesLIVE that said she had heard several gunshots but did not know what had happened.

Following the incident, the scene was teeming with numerous metro police officers, SAPS and residents.

SAPS spokesman Colonel Thembeka Mbele confirmed that three people had been killed and five others wounded. She added that one firearm had been recovered at the scene.

Metro spokesman Senior Superintendent Parboo Sewpersad says that neighbours heard a commotion before the shooting. Confirms that one of the people killed was an off duty Metro policeman #DurbanCBDShooting
Video: @Khungwayo pic.twitter.com/dluEFPSdKx

Gunmen killed in high-speed chase and shootout in Durban

Two gunmen were shot dead and a third was wounded after a high-speed chase and dramatic exchange of fire between the gang and security officers in ...
News
3 years ago

Police went toe-to-toe with a gang of armed robbers who had stormed the Phoenix SaveRite, north of Durban, at the weekend.
News
3 years ago

A botched hold-up in Morningside on Wednesday night ended with the deaths of a gunman and an innocent bystander.
News
3 years ago

An Overport, Durban, man who stumbled upon a gang of heavily armed house robbers was wounded as he traded fire with the gunmen on Wednesday.
News
3 years ago