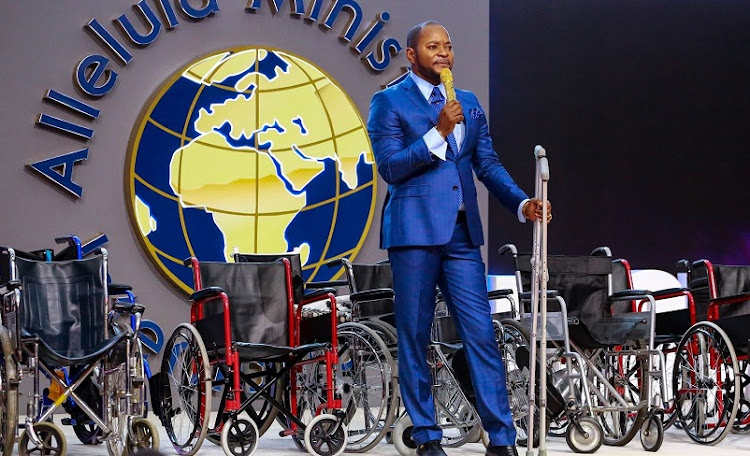 Alph Lukau's 'raising of a dead man' has been described as a staged, fraudulent and unfaithful act.
Image: Alleluia Ministries International via Facebook

Controversial pastor Alph Lukau of Alleluia Ministries - who made headlines after claiming to raise a man from the dead on Sunday - has been accused of organised crime, fraud and misrepresentation.

The allegation comes from the leader of another church group, who on Tuesday said he had opened a criminal case against Lukau.

"I have seen too much pulpit greed and commercialisation going on in the church, among other disturbing practices," said Bishop Elly Mogodiri of St Oaks Global Church of Christ.

"Right now we are witnessing the staged, fraudulent and unfaithful act of resurrecting a deceased person in the church of Alleluia Ministries International (AMI) under the leadership of prophet Alph Lukau."

Pastor Alph Lukau is a Congolese televangelist whose main church is based in Sandton, with various branches in the country and throughout Africa.
News
3 years ago

Mogodiri accused Lukau of being a false prophet who abused the church for his own personal gain, including through tithes.

The bishop first took his complaint to the Hartbeespoort Community Development Initiative (HCDI), a non-profit organisation that provides human rights and social cohesion assistance to disadvantaged members of the local community. He later approached the police.

"I am aware and have been duly advised that this case falls within the ambit of organised crime, fraud and misrepresentation, among other misdemeanours. As a result, I have since approached my local police station, being Hartbeespoort SAPS in the North West province, and opened an organised crime case," he said.

North West police confirmed that a case had been lodged.

Mogodiri said he was also looking into pursuing the prospect of civil litigation against Lukau, which he claimed would benefit the poor victims of Lukau's wrongdoing.

"Churches need to desist from brand management decisions because that is not godly. As the body of Christ, we should be teaching our people to relate directly with God and not with us as bishops, prophets or pastors," he said.

"God should be the one and only priority. All tithing and contributions to the church should be used to further and support poor communities and not an amassment of wealth by the church leaders, as is the case prevailing in our country right now."

Controversial pastor Alph Lukau of Alleluia Ministries dominated headlines and Twitter trends after a video of him "resurrecting" a man went viral.
News
3 years ago

The Johannesburg Metro Police Department (JMPD) has admitted that it escorted church ministers prior to the appointment of its new chief, David Tembe.
News
3 years ago