About half of the people who took part in a survey on public perceptions of taxi use, safety and crime said they had seen or experienced taxis breaking the law.

"The most common of these infringements was a driver breaking the rules of the road, which 74% of all respondents (and 70% of those who used minibus taxis) said they [had] seen or experienced," according to a poll released by the Institute for Race Relations (IRR) on Monday.

Around 45% of those polled witnessed or experienced taxi-related violence (43% of minibus taxi users)."

The IRR commissioned Victory Research to conduct the polling, which was done between November 26 and December 4 last year, with a "demographically representative" sample of South Africans over 18 years. The 1,237 respondents were asked about their taxi use, road safety, taxi safety, and taxi-related crime and violence.

"The sampling frame consists of every potential cell phone number in existence in SA, from which a probability sample is drawn. This approach ensures that every number stands an equal chance of being included in the study, which is the most basic condition that must be met for survey results to be generalisable to the population from which a sample is drawn," the IRR said.

The poll was supplemented by "two fully demographically representative sub-samples" for KwaZulu-Natal and Gauteng with sample sizes of 409 and 505. 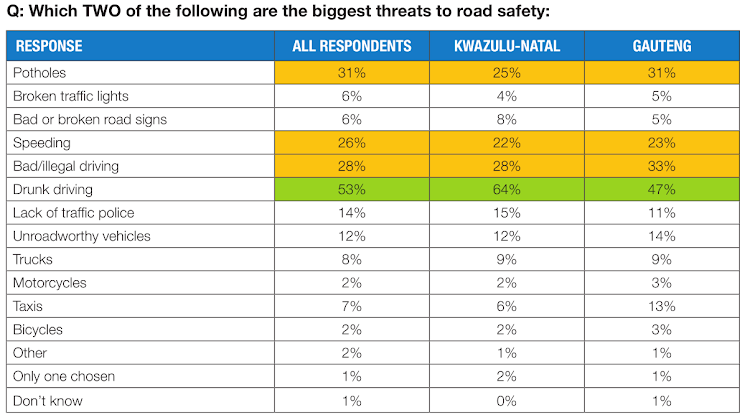 Nationally, more than four out five people polled used taxi services, including metered taxis and e-hailing services such as Uber or Lyft. Most taxi passengers were in Gauteng and KwaZulu-Natal.

"It is significant that three of the top-four biggest threats [with the exception of potholes] involve bad or illegal driving in some form or another."

Most used taxis two to three times a week.

Unruly passenger thrown out of minibus taxi in Joburg

The journey ended abruptly for an unruly passenger who caused a commotion on a minibus taxi and was promptly thrown out of the vehicle in ...
News
3 years ago

An alleged Uber taxi driver who claimed to have been hijacked by a gang of armed gunmen who robbed Edenvale High School in Johannesburg has been ...
News
3 years ago

Earning R8,000 a week with e-taxi is 'impossible': former driver

It is "impossible" to earn R8,000 a week as a driver for the e-hailing service Taxify.
News
3 years ago