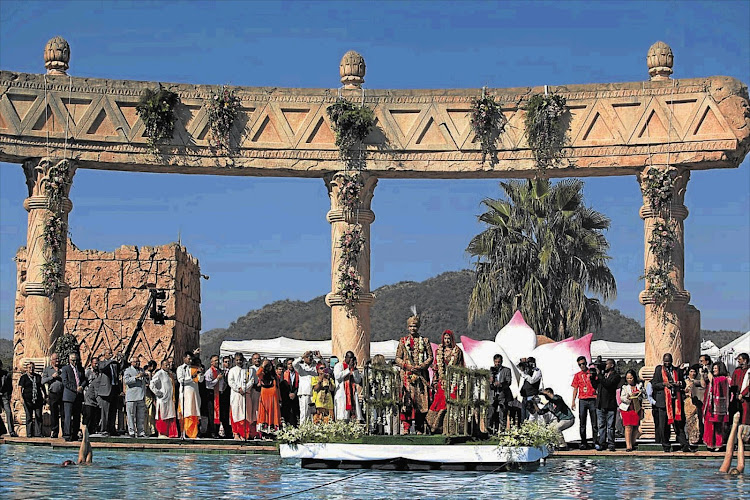 Vela Gupta and her husband Aaskash Jahajgarhia with relatives and guests during ceremonies for their wedding at Sun City on May 1 2013.
Image: Supplied

The Gupta family still owes Sun City money six years after it held a lavish wedding at the resort.

"We can confirm that there is still some money owed to Sun City for the 2013 Gupta wedding, but the amount is by no means as high as some media have reported," Sun International spokesperson Zoleka Skweyiya told TimesLIVE on Wednesday.

"While we continue to make every effort to recover the money we would prefer not to comment on these efforts."

This comes as the Guptas reportedly held a double wedding at a palatial hotel in Abu Dhabi between February 19 and 23.

The amaBhungane Centre for Investigative Journalism published a nine-page wedding invitation and said the bash could end up costing as much as R100m.

"This is the third publicly lavish wedding the family has funded."

The Gupta family are reported to be hosting a lavish double wedding at a palatial hotel in Abu Dhabi.
News
3 years ago

The logos of Gupta companies in South Africa, including the Koornfontein mine where miners have gone unpaid, are featured in the wedding invitation.

The publication said a request for comment directed to a Gupta lawyer in South Africa went unanswered.

The Gupta family made headlines when they hosted the "wedding of the century" at Sun City in 2013.

More than 200 guests arrived in a passenger jet that landed without permission from the military at Waterkloof Air Force Base, one of the country’s national key points.

TimesLIVE reported in 2017 how invoices from the R30m bash, contained in a tranche of leaked e-mails‚ painted an astonishing picture of the family's exorbitant sweet tooth. Hazelnut milk Lindor truffles alone set taxpayers back R13‚088.

Eskom's dodgy coal-supply contract with the Gupta family's Brakfontein mine came under the spotlight at the state capture inquiry on Tuesday when the ...
Politics
3 years ago

The leaked e-mails revealed how the wedding was paid for with money funnelled from the Estina dairy project in the Free State to the UAE.

BusinessLIVE reported in October 2018 that Ajay Gupta‚ the eldest brother of the family that stands accused of being at the centre of state capture allegations‚ said the family had "never asked any minister for any commercial benefit".

In an in-depth interview in Dubai with the New York Times‚ Gupta said he would testify at the Zondo commission into state capture‚ "but not at this moment".

E-mails between Gupta business associates and former Eskom executives have laid bare the influence the family had over contractual agreements and ...
Politics
3 years ago