'It's been a scary time', says slapped Sans Souci pupil 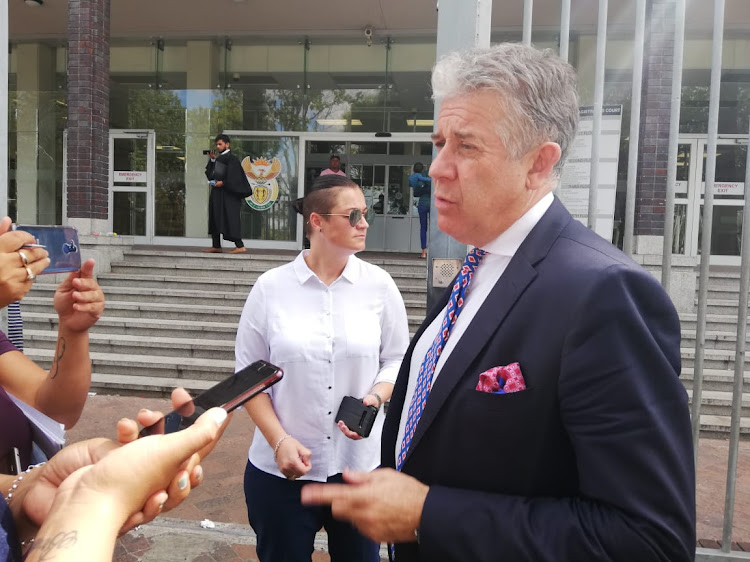 The family of the Sans Souci Girls' High School pupil who was allegedly assaulted by her teacher earlier this month says life has been hard since the incident - with the 16-year-old girl having "sleepless nights" due to the trauma she experienced.

The mother of the Grade 9 pupil from Gugulethu, who can't be named to protect the identity of the minor, said not only did her daughter have to deal with the stress of not going to school for almost a month, but also with threats allegedly made by fellow pupils.

School friends of the girl - who was suspended early in February after the incident - allegedly “threatened to harm her should she go back to the school”, her mom said.

The grade 9 pupil, who spoke to TimesLIVE with the permission of her mother, said February had been a "scary time for me and my friends due to threats that I've been getting and not going to school".

"It's a very scary situation. School is supposed to be a safe space for kids to go. It's where you spend most of your time, and your teacher is supposed to be like your mother. I was very hurt with what has happened.

The teacher who allegedly slapped a Grade 9 pupil at Sans Souci Girls' High is facing a charge of common assault.
News
3 years ago

A union representing a Western Cape teacher who was caught on video slapping a pupil in a classroom at a Cape Town school this month is advocating ...
News
3 years ago

"I remain hurt even today, and I'm shocked that people don't see it the way I see it," she said.

Both the teacher, Clarissa Venter, 34, and the Grade 9 pupil appeared in Wynberg magistrate's court to face separate charges of assault they opened against each other.

The 16-year-old, who appeared in-camera so as not to be identified, is due back in court on April 1 while the case against the teacher is set down for April 18.

The two are also set to appear before the school's disciplinary committee this week following the altercation, which was caught on camera and went viral. Venter is due to appear on Thursday while the pupil is to appear on Friday.

Speaking outside Wynberg magistrate's court, the girl's mother said the entire family was affected by the incident.

"She is very traumatised about this whole issue. Because the school is not giving her any kind of support, I've taken it upon myself to seek therapy privately for her. It is a traumatic matter for the entire family … not just her. It has affected everyone negatively.

"Just this week I've got to be off work for several days to appear in court, to support her when she appears before the school's disciplinary committee on Friday, and she has a session with a psychologist, which I have to take her to," she said.

The 30-year-old Witbank teacher alleged to have locked a Grade 1 learner in a strongroom at Blackhill Primary School, forgetting him there overnight, ...
News
3 years ago

The mother said she decided to lay charges against the teacher after she witnessed "the brutal nature of the video".

"I'm not saying when my child is wrong she should not be reprimanded. I'm saying, 'Treat my child like she is yours.' She is under your [the teacher's] protection when she is at school. So treat her fairly and treat her right.

"Likewise I expect my child to treat teachers with the utmost respect that she gives me as a parent. I don't expect someone to come and swear at my child and klap my child through the face and grab her by the clothes, and break the stuff that I bought for her," she said.

The mother said even when corporal punishment was still allowed at school, it was not meant to ill-treat and provoke children.

"Back in the day I also got corporal punishment at school, but there was never a day where a teacher had to slap you through the face and grab you by the chest. What does a teacher expect you to do when they do that? You got punishment for the right reasons. The teacher is a professional and she must therefore act in a professional manner," she said.

A teacher from Rosebank Junior School in Cape Town is facing disciplinary action after he allegedly ordered pupils to partially strip because of ...
News
3 years ago

In the video, the teacher can be seen and heard embroiled in an argument with the grade 9 girl over a book. The teacher grabs the learner's cellphone from her hands, telling her it was against the school's conduct to have it during class.

Matters quickly escalate as both the teacher and the child accuse each other of swearing. The teacher tells the pupil to leave the class, but she refuses.

The pupil says something inaudible and the teacher replies, "Are you swearing at me? You are speaking a different language in my class!"

The teacher shouts, "Are you hitting me?" She then slaps the pupil and continues, "You push me! You swear at me!"

Venter's lawyer, William Booth, requested that April 18 be the last postponement in the case as the state had had enough time to investigate the case.

'I am going to teach you a lesson': Mom beats teacher with umbrella

A mother is due in court on Monday, accused of beating her child's teacher with an umbrella.
News
3 years ago

Mpumalanga's education department confirmed on Sunday that a Witbank teacher who was suspended for allegedly locking a grade 1 learner in a ...
News
3 years ago

An investigation is under way after a teacher allegedly penalised several Grade 1 pupils by confining them to a classroom for not having R2 on casual ...
News
3 years ago