Image: Nomahlubi Jordaan Incredible Happenings Ministries leader Paseka 'Mboro' Motsoeneng prays next to his BMW i8 before he goes to the Sandton police station to lay a charge against pastor Alph Lukau, of Alleluia Ministries on Thursday February 28 2019.

“Let's not fool people. Stop lying in the name of God.”

That was the word from Incredible Happenings Ministries leader Paseka "Mboro" Motsoeneng as he stood outside Alleluia Ministries and demanded to see pastor Alph Lukau on Thursday.

Mboro had earlier vowed to confront Lukau for "bringing Christianity into disrepute" by staging an event in which he appeared to be raising a man in a coffin from the dead.

Mboro drove to Alleluia Ministries in Sandton in his BMW i8. He stood outside with his supporters and members of other denominations. The scene was set for a showdown of biblical proportions.

Lukau, however, was nowhere to be seen.

Members of Alleluia Ministries were inside the church, watching Mboro through the window. Others later came out carrying placards but they were quickly confiscated by a man affiliated with the church.

"Why do you walk away if I am wrong? I want you to surrender and apologise. Can I see the leadership of the church? Maybe I can be prayed for," said Mboro.

"I want to call the pastor that we can go to Nelson Mandela’s grave and raise him," he added. 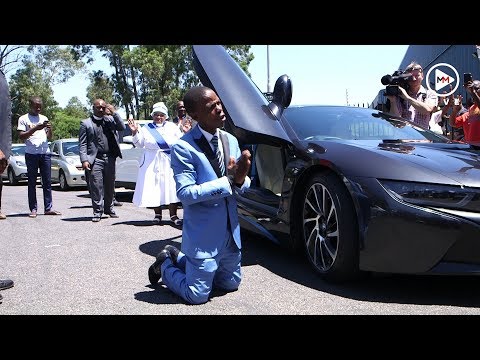 Mboro wanted to know why nobody was willing to speak to his delegation. "I didn't even bring a bodyguard. They say I am jealous. What jealous? I gave away cars, houses. There is no competition here. I'm here because the name of Christ has been played with.

"This miracle is a fraud and if it's not, they must bring proof. Let's talk about it as men of God. That man never died. God will heal people when he wants, in any way he wants. Let's not fake things," bellowed Mboro.

The video of Lukau bringing the "dead" man back to life during a church service on Sunday went viral on social media.

Alleluia Ministries said in a statement on Wednesday that Lukau did not claim to have brought a dead man back to life.

"At no stage did the pastor [Lukau] claim that he resurrected the person shown in the video, who was identified by his family as Elliot.

"Prior to even praying for Elliot, pastor Alph states that Elliot is, in fact, breathing," the church said.

Mboro later proceeded to the Sandton police station, saying that he intended opening criminal and fraud charges against Lukau.