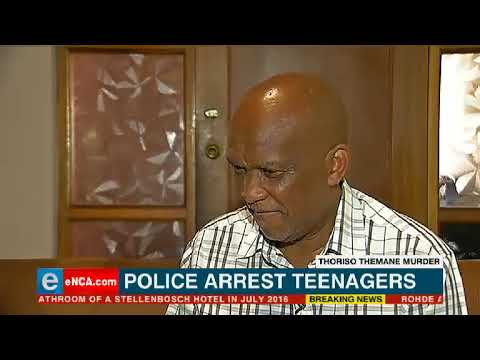 Thoriso Themane’s father, Mahlapahlapana, has shared the heartbreaking story of losing his son – from the last time he saw him, as he left for music practice, to when he received the devastating news of his passing.

Thoriso, 28, from Flora Park in Limpopo, was assaulted on Saturday, allegedly by a group of high school children.

He was taken to hospital, where he died on Sunday morning.

Themane spoke to eNCA on Wednesday, describing his son as a fun-loving guy. When asked what message he had for Themane, he replied: “I’m sorry for bringing you into the vicious world.”

Here, Mahlapahlapana details his last moments with his son.

“The last time I saw my son was the past Saturday. It was around 10 o’clock in the morning. I was rushing to a church training meeting, a leadership training meeting in a place called Seshego. When I was leaving, he was taking off his speakers. I’ve just bought him two speakers and he was going to try them at a church where they were going to practice.”

“When he didn’t return on Saturday, we were perplexed because he was not the type of fellow that would be away without notice. And if he would be running late for one reason or the other, he would call and say, ‘Papa we’re still here, we’re practicing’.”

“His phone was off. We tried again, again and again, and then we slept and we thought maybe we’d find him in the morning in his room. When I woke up and I went to check his room, he was not there. Sunday morning, I went again to his room and he was not there.”

“When we came back from church and he was not there, we started panicking. We made links with all his friends and they all indicated that they were with him during the day. They don’t know where he could be.”

“After the police station, we proceeded to the hospital and asked if there were any people who were admitted between last night and Sunday morning. They checked and said we don’t have the name of this person here. She checked and said there is only one person who was admitted, a male person.”

"It's written unknown patient, he is in ward C. We proceeded to ward C, when we arrived we told them we're in search of a fellow and they said how was he dressed and the mother described the clothing and the nurse said it seems that's the one who is here. We sighed with relief."

“But then she came a little later and said, okay, Papa le Mama, can we go into that room. And that is when our hearts began to beat very fast. Because I know that when they take you to that room, they don’t have [good] news. They came with the senior person in that ward and they said, how are you related to this fellow, and we said, we are the parents.”

“They said, oh, sorry. This fellow was here, he was admitted last night and he passed on this morning. That Sunday morning. At that time, it was around 7-8 o’clock in the evening. That is when we received the news and we were shocked.”