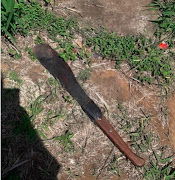 Image: RUSA The panga that was used during the attack in Tongaat, KwaZulu-Natal, on Monday.

An alleged rapist was hacked to death by the husband of the woman he allegedly attempted to rape in Magwaveni, Tongaat, in KwaZulu-Natal on Monday.

Reaction Unit SA (Rusa) spokesperson Prem Balram said officers responded to the incident at around 11am.

"Upon arrival the suspect was found lying outside the home bleeding excessively from injuries to his head and arms," he said.

According to Balram, the man, armed with a panga, entered a residence and allegedly attempted to rape the woman, who is five months' pregnant.

"Her husband was in one of the bedrooms and went to his wife's aid when he heard her screaming for help.

"When he found the suspect attempting to rape his wife he grabbed the suspect's panga and repeatedly hacked him with it," he said.

The man died on the scene.

Zwane said the husband was arrested on the scene while the police investigate further.